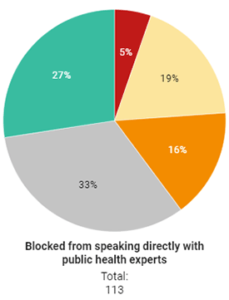 Reporters covering the COVID-19 pandemic have often been unable to speak directly with public health experts, hindering access to complete and accurate information, according to results of AHCJ’s “Covering Covid” survey.

Nearly half of respondents reported that “always,” “most of the time” or “about half the time” they had been blocked from speaking with public health experts. More than half said that press briefings in their area have been led by politicians rather than health experts, and those briefings often failed to answer critical questions.

While the sidelining of federal scientists has drawn national attention, the AHCJ survey shows that the problem occurs at every level of government and results in inadequate information reaching the public.

AHCJ’s Right to Know Committee emailed the survey to 1,132 professional and associate members during August and September. About 10%, or 113 people, responded.

“Our survey highlights some troubling trends,” said Sabriya Rice, an AHCJ board member and vice chair of AHCJ’s Right to Know Committee. “The public needs to hear directly from the trusted health experts who are paid by taxpayers to inform and advise. The decision by governors and mayors to hog the podium does a disservice to us all.”

Another key finding was widespread problems with data. Lack of data or lack of access to data was an obstacle for 60%.

While most of the respondents said they could consistently obtain information on new and cumulative COVID infections and deaths, it was harder to obtain consistent information on other aspects, such as antibody tests, diagnostic tests and breakdowns by race/ethnicity.

Inconsistent data reporting by states and counties also emerged in answers to the survey’s request for open-ended responses. Georgia, Iowa, California and Texas were among the states mentioned as having muddled, incomplete, or inaccurate data.

Who was most helpful

Slow responses from government agencies was an obstacle half the time or more often for 70% of respondents.

Among the other issues raised in open-ended comments were: overly political and insufficiently informative White House briefings; the difficulty asking follow-up questions when meetings are held using Zoom; and inconsistent information from school districts.

A majority of respondents (55 people or 58%) had never undergone a PCR nasal swab test, a type of diagnostic test that determines if a person has an active COVID-19 infection. Only one had tested positive. Only nine respondents said their employer offered testing.

The vast majority had worked from home and conducted interviews on the phone or Internet. Slightly more than half wore a mask and carried hand sanitizer on assignments. Only two had gone on a high-risk assignment against their will, and 24 had felt in danger of infection while working.

Asked what strategies the Right to Know Committee should pursue, all those who answered the question (95 respondents) said it would be “very helpful” or “somewhat helpful” to work jointly with other media organizations, and all but one favored providing advice to members on overcoming obstacles.

“We really appreciate this input,” Rice said. “It bolsters our ability to tailor the information we provide during the Right to Know workshop we hold each year at the annual convention. These survey results will guide our actions going forward.”

The survey isn’t the only opportunity to be in touch with us. Please send any suggestions, complaints, or requests for action to RTK chair Felice Freyer (felice.freyer@globe.com) or vice chair Sabriya Rice (sabriya.rice@uga.edu).