About Joseph Burns and Liz Seegert

View all posts by Joseph Burns and Liz Seegert → 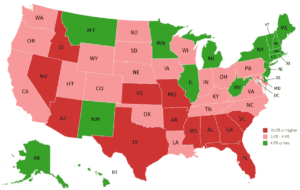 Source: State-By-State Breakdown: COVID-19 Testing Positivity Rates Among The General Population, AHCA/NCALThe American Health Care Association and National Center for Assisted Living say officials in 33 states with a COVID-19 test positivity rate of 5% or higher (states shaded in red and pink) should ensure that nursing homes have adequate supplies of personal protective equipment, pressure clinical laboratories to expedite test results and take other steps to reduce the spread of the coronavirus.

Six months after the first nursing home residents died of the novel coronavirus, many nursing homes and long-term care facilities continue to face a shortage of personal protective equipment, test kits, delayed test results and worker shortages. At the same time, positivity rates continue to climb in many states and, once again, nursing homes are among the leading sources of death and infections nationwide.

The COVID-19 Nursing Home Data tracker of the federal Centers for Medicare and Medicaid Services (CMS), reports more than 164,055 residents have confirmed cases of the virus and more than 102,531 have suspected cases as of July 26, according to the most recently available data. At the same time, more than 43,231 long term care residents have died. These numbers do not include positive cases and deaths among workers that would send the numbers soaring if included.

Jon Kamp, Christopher Weaver and Anna Wilde Mathews reported in The Wall Street Journal on Aug. 8 that the number of deaths among nursing home residents is rising again after dropping in June. The recent increase came in states such as Texas and Florida where the coronavirus spread quickly.

A new report from the American Health Care Association and National Center for Assisted Living (AHCA/NCAL) shows that since July 26, 33 states have reported a positive infection rate from coronavirus tests of over 5%. (See red and pink states in the accompanying map.)

This rate underscores the urgent need for more COVID-19 testing and personal protective equipment (PPE) for staff in nursing homes and long-term care (LTC) facilities. Both testing and PPE are needed for these facilities to limit the spread of the virus.

Compounding the problem of shortages, many states still have a significant percentage of facilities with insufficient PPE, including N95 masks, surgical masks, and gowns, according to AHCA and NCAL. Nursing homes in many states have less than a one-week supply of PPE, the data show.

The two associations used data from the Johns Hopkins University Coronavirus Resource Center and the COVID Tracking Project to list the positive COVID-19 test rate in each state and the percentage of nursing homes in each state with less than seven days worth of PPE.

For journalists covering the pandemic, this story has increasing urgency, and the data would be useful when writing about how nursing homes and LTC facilities are managing in every city and town, particularly those in states with high positivity rates.

When covering this story, journalists will find that on July 22, CMS announced that it began requiring nursing homes and LTC facilities in states with a positivity rate of 5% or higher to test all nursing home staff each week. Previously, CMS had only recommended such testing. CMS said it would ship more than 15,000 point-of-care testing devices to nursing homes over the next few months and would ship 600 devices during the week of July 22. Nursing homes and LTC facilities could use funds from the provider relief program to pay to test visitors, CMS added.

“If implemented, 11,640 nursing homes would be required to conduct such weekly testing,” AHCA and NCAL said. The two groups represent more than 14,000 nursing homes and assisted living facilities.

In July, these groups wrote to the National Governors Association (NGA) warning of imminent outbreaks at nursing homes. They assisted living facilities due to recent spikes in infections in some states. Nursing homes and LTC facilities already faced severe PPE shortages and delays of as long as five days or more in getting test results for residents and caregivers, they reported.

Terry Fulmer, Ph.D., RN, a member of the new Independent Coronavirus Commission for Safety and Quality in Nursing Homes, criticized CMS’ efforts. (Full disclosure: Fulmer is president of the John A. Hartford Foundation, in New York, which contributes funding for AHCJ’s core topic on aging.)

“While CMS is attempting to manage shortages by sending PPE and rapid test kits to hot spots, it’s like playing whack-a-mole, because critical areas of need change so quickly,” she said. The commission was established in April to conduct a comprehensive assessment of COVID-19 in long term care facilities and make recommendations for the best ways to combat the disease.