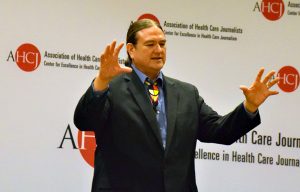 The novel coronavirus has affected underserved communities and people of color at disproportionately high rates, including taking an extraordinary toll among Native Americans as measured in rates of infections and deaths.

To assist health care journalists covering the pandemic’s effect on Native Americans, the Association of Health Care Journalists will host a webinar with Donald Warne, M.D., MPH, at 1:30 pm ET on Wednesday, June 10.

Two years ago, Warne made an unforgettable presentation when he opened the Health Journalism 2018 conference in Phoenix, as my colleague Joanne Kenen reported for this blog. That blog post includes a link to a video of his comments.

Warne, director of the Indians Into Medicine program and director of the Master of Public Health program in the School of Medicine and Health Sciences at the University of North Dakota, explained that American Indians (his preferred term) have faced trauma over many generations. They experience adverse childhood events at rates far higher than that of their white counterparts, he said, which plays an outsized role in contributing to their poor health.

Warne, who also is a member of the Oglala Lakota tribe in South Dakota, discuss how the virus is affecting Americans Indians, the best sources of data about the outbreak in their tribes and how journalists can cover the pandemic in these underserved communities.

Among American Indian tribes, rates of coronavirus infections and deaths are among the highest in the nation. Late last month, the Navajo Nation experienced the largest coronavirus outbreak per capita in the United States when it surpassed New York State for highest COVID-19 infection rate, as MSNBC reported on May 20.

Just days earlier, Chelsea Curtis, writing for Arizona Central, explained that on May 11, the Navajo Nation (with a population of 332,129, according to the 2000 census) had more than 3,204 cases and 102 confirmed deaths. As of June 3, the Indian Health Service, a division of the federal Department of Health and Human Services, reported 12,072 cases in 12 IHS service areas, including 6,481 cases among the Navajo. The IHS provides federal health services to American Indians and Alaska Natives.

The Navajo Nation is the largest American Indian tribe in the United States. It extends over 27,000 square miles in northeast Arizona, New Mexico and Utah, according to a fact sheet on the nation’s Discover Navajo website. Note that the site listed the unemployment rate among its population as 55.9%.

As Curtis wrote, the University of California, San Francisco, and Doctors Without Borders sent teams of doctors and nurses to Navajo Nation in April. Nine health care workers from Doctors Without Borders were providing care to the Navajo in Kayenta, Ariz., and Gallup, N.M. Part of that team had been working since mid-April with a Pueblo tribe in New Mexico. The team would continue its work there this month, Curtis said.

To those of us who heard Warne’s presentation in Phoenix, it’s not surprising that the coronavirus is taking a toll in these communities. “You don’t have to cross an ocean to find Third World health conditions,” he said. “They’re on our reservations.”

Kenen closed her report with a reminder that the United States needs to pay attention and want change. “It’s been ignored,” Warne said. “And it can’t keep being ignored.”