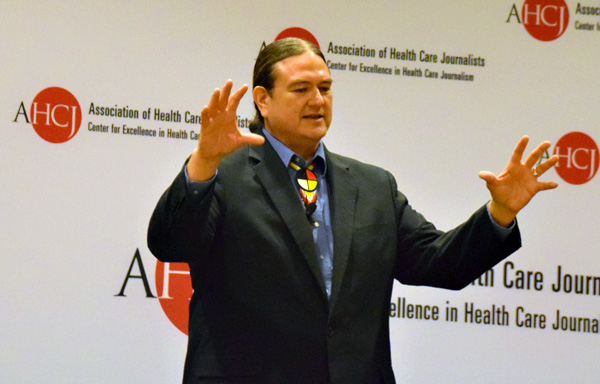 Racial disparities, social determinants and perverse decisions – paying to build a ramp at an amputee’s home, for instance, but not paying for the good health that would have prevented diabetes in the first place – are not unique to Indian country, he said at the opening session of Health Journalism 2018 in Phoenix.

But they are worse. And they are largely invisible to the rest of the country – all of which was once Indian Country.

Poverty, inequality and lack of access to health and education all contribute to poor health – but there’s so much more.

Historical trauma, marking generation after generation, and adverse childhood experiences or ACE that American Indians (his preferred term) experience at rates far higher than their white counterparts play a powerful role in American Indian health, said Warne, who is chair of the Department of Public Health in the College of Health Professions at North Dakota State University and the senior policy adviser to the Great Plains Tribal Chairmen’s Health Board. He would like to see more study of epigenetics to understand how toxic stress – centuries of trauma, displacement, discrimination and violence – have changed American Indians’ genes.

“You don’t have to cross an ocean to find Third World health conditions – they’re on our reservations,” he said.

Whites in North Dakota have a life expectancy of 77.4 years. For American Indians it’s, 56.6.

And understanding American Indians’ health – or poor health – requires understanding their history, which he terms “almost a complete genocide.” To get to health equity, “we have to walk through truth.”

Many American Indian kids – his mother among them – were forced to attend boarding schools thousands of miles from home. Their purpose was to eradicate the Indian in them. “Kill the Indian, Save the Man,” was one motto he cited. Conditions were harsh; many children died at age six or eight or 12. Others were scarred, albeit invisibly.

He believes there are solutions – but an effort has to be made to find them, including by competent and permanent leadership at the troubled Indian Health Service, which has had five acting directors since 2013.

Home visits to new mothers, and parenting education have shown promise, he said. Improvements in recent years to the WIC food program have been constructive. A lot more effort has to go into addressing things like food deserts; where he grew up, in Kyle, S.D., the nearest supermarket was 100 miles away and pretty much everything sold at the one nearby café was breaded and fried.

All sorts of “best practices” programs being rolled out in other underserved communities may or may not work for American Indians. They haven’t been well tested there. And some of the “best practices” that are being identified as promising in these Indian communities haven’t gone through the necessary evaluation and scrutiny (because of a lack of resources) to get endorsed and widely deployed via government-backed programs.

Data is essential – and American Indians aren’t broken out in most data sets, which identify blacks, whites and Hispanics. “We have to be included,” Warne said.

Medicaid expansion, in states that grew the program under the ACA, has been hugely important, the biggest expansion of Indian health care in decades. But Medicaid also needs to allow more culturally-sensitive programs geared to American Indians.

And of course, the country as a whole has to pay attention – and want change.

“It’s been ignored,” he said. “And it can’t keep being ignored.”