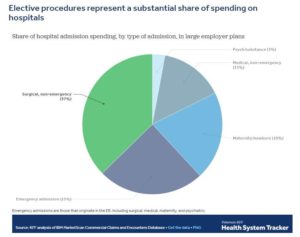 While the death of more than 120,000 Americans related to the novel coronavirus is the most important story, the economic impact of the pandemic on hospitals and physicians is another significant story to cover.

Not only are providers paying higher prices for equipment and supplies, but they also lost income when stay-at-home orders put a hold on elective surgeries and nonessential physician visits.

Mark Taylor recently wrote about the devastating financial effects the virus has had on hospitals in an article for MarketWatch, noting that, “The coronavirus is devastating U.S. hospitals, which will lose $200 billion in revenue by the end of June.”

Los Angeles Times reporter Noam Levey was among the first to cover the effect of the pandemic on physicians when he explained that while hospitals were struggling to care for the surge of coronavirus-infected patients, a related financial crisis was taking place in physicians’ offices. Cheryl Clark in MedPage Today described the loss of income among physicians, explaining that the pandemic also was decimating the physician workforce by forcing older, at-risk doctors into retirement earlier than planned.

Taylor’s story described how the loss of revenue from the moratorium on non-emergency surgeries cut deep into hospital cash flow. Elective procedures such as joint replacement, tumor removal and some cardiac care represent an average of 48% of all hospital income, he reported. Rick Pollock, president and CEO of the American Hospital Association (AHA), told him that the virus had caused “the greatest financial crisis in history for hospitals and health systems.”

An AHA report last month said that since March 1, the pandemic caused costs to rise and revenue to fall. The net effect on health care facilities since then has been a loss of about $50.7 billion each month for a four-month total of almost $203 billion by the end of June.

Rural hospitals, in particular, were struggling to remain open even before the pandemic, Taylor reported. Facilities in the heartland now are facing widespread virus infections while continuing to wrestle with financial concerns.

“One rural hospital in Kansas and another in West Virginia went out of business in May, and two more closed in Florida,” he wrote. “Five are in danger of closing in Washington state, according to the state’s hospital association.”

Since hospitals are among the largest employers in many cities and towns, their financial problems are a big story nationwide as hospital closings or downsizings, with resulting layoffs or furloughs, ripple through the economy. A good story for you to track in the coming months will be how financially sound facilities consider acquiring or merging with smaller hospitals, further consolidating the industry.

“The flow of red ink has left many operations scrambling to refinance debt, merge with other outfits or seek protection by declaring bankruptcy,” Taylor wrote.

Another trend to track: Facing deep losses, hospitals will attempt to raise rates for consumers, health insurers and employers. It will be important for journalists to note that the cost of hospital care already was a concern among employers and health care researchers, as we reported in April in “Scrutiny of hospital charges likely to intensify in wake of pandemic.”

In that AHCJ blog post, we explained how researchers have reported how much hospital prices had risen in recent years when compared with what Medicare pays. This tip sheet, “Resources to help you track hospital costs for patients with COVID-19, other ailments,” may be useful in your coverage.

Another angle to pursue is how hospitals are coping with the increased number of patients needing emergency room care or treatment in intensive care units. In another MarketWatch story, Taylor profiled Eugene Litvak, a consultant and Harvard University professor who founded the Institute for Healthcare Optimization in Newton, Mass. The institute specializes in improving patient flow and other ways a hospital can meet unexpected surges of critical cases, such as those they have faced during the pandemic.