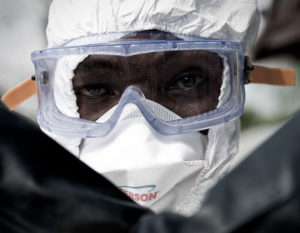 It is hard to find context while keeping track of the unfolding news about the COVID-19 outbreak. Every day there is new research, new reports of deaths, new policy controversies and debates about the economy, our public health system and whether the world will ever be the same.

A look at the history of pandemics, as well as collecting COVID-19 personal stories and journals can be useful when looking for context and lessons learned from this pandemic.

For a quick walk through outbreak history, take a read through Beth Skwarecki’s book “Outbreak: 50 Tales of Epidemics that Terrorized the World.”

Each chapter of the book is about 1,000 words and deftly and succinctly tells interesting tales about infectious disease outbreaks, many of which continue to plague the world (though mostly in low-income countries), even before COVID-19.

She begins with malaria, which is believed to have first emerged in 10,000 B.C. (so since the beginning of organized human society) and ends with the Ebola outbreak in 2014.

“The more we learn, the more we make some of the same mistakes,” Skwarecki said in a recent “How I Did It” piece for AHCJ.

For example, history shows that “there is always class stratification in outbreaks,” she says. “People want to blame poor people for the outbreak. Those with less income are already at a disadvantage and they are extra screwed over when these kinds of things happen, and that should be written about” by journalists.

In March 2020, the New England Journal of Medicine took a look at pandemic history and observed a pattern in social drama that has played out repeatedly for thousands of years. It seems that few lessons are learned.

“Epidemics unfold as dramas in three acts,’ wrote David S. Jones, M.D., Ph.D., a professor of the culture of medicine at Harvard University’s department of the history of science.

In the first act, citizens ignore clues there is an ongoing outbreak, until there is enough illness and death to force people to pay attention. In the second act, recognition of the growing outbreak causes citizens to demand and offer explanations for the outbreak. Those demands generate a public response that, in the third act, can result in even more disruption than the disease itself.

This has played out again in 2020. At first many world leaders, including President Trump, downplayed the significance of the COVID-19 outbreak. Then conspiracy theories abounded on social media on the virus’s origin, and then demand to respond to the world economy’s halt may result in leaders loosening social distancing measures too early.

Further, pandemics tend to highlight underlying weaknesses in the health system that might not have been in evidence prior to the outbreak.

Indeed, a higher share of deaths and illness have been reported in vulnerable and low-income communities, where access to high quality health care is lower.

“The history of epidemics offers considerable advice, but only if people know the history and respond with wisdom,” writes Jones.

So what will historians see when they look at COVID-19? Certainly historians in the future will have the opportunity to assess the most documented pandemic in human history.

The New York Times asked this question in an April 15 story, which highlights the efforts of organizations encouraging people to write journals and record their thoughts for posterity.

“All of a sudden the pandemic was right here and personal,” said Dawne Dewey, head of special collections and archives at Wright State University, which has collected COVID-19 personal stories. “We put the call out because we need stories to help future generations understand this moment in history.”

1 thought on “Learning the lessons of past pandemics”