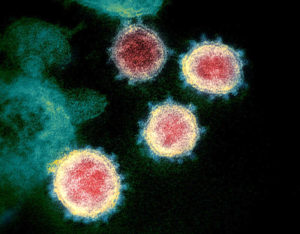 Photo: NIAID-RML via FlickrAn electron microscope image of SARS-CoV-2 — also known as 2019-nCoV — which is the virus that causes COVID-19.

With the number of COVID-19 cases expanding exponentially, the story about the potential for treatments and vaccines remains a top priority. So does the story of drug pricing.

One of the most promising drugs is remdesivir, an antiviral under development by biotech company Gilead Sciences.

Covering COVID-19: What do you need to know?

March 10, 1:30-2:30 p.m. ET
Hear a panel of infectious disease experts and a journalist explain what is known, what to watch out for, where to find trusted resources and how to combat misinformation and confusion.

Gilead CEO Daniel O’Day told media attendees that the drug, which stops the replication of SARS-CoV-2, was in the late stage of a controlled clinical trial in Wuhan, China, and the company should have “by the end of April, preliminary information” about its effectiveness.

Gilead is also conducting a clinical trial in the U.S. with the support of the National Institute of Allergy and Infectious Diseases. The University of Nebraska Medical Center in Omaha and Providence Sacred Heart Medical Center in Spokane, Wash., have begun recruiting patients for that trial.

O’Day cautioned that while remdesivir has shown great promise in the lab for destroying SARS-CoV 2 virus, just how people respond to the drug is yet to be determined.

If the drug is shown to be effective, Gilead has the experience to get the drug manufactured and distributed quickly, O’Day said. The company already has begun investing in the manufacturing process for remdesivir to speed up getting it to market should it be approved, he noted.

But there is a question about whether it will be affordable. Gilead is known for developing one of the first important cures for hepatitis-C with its drug Solvaldi, and with its HIV-prevention drug, Truvada. Both drugs are expensive and have kicked off fierce debates about drug pricing and patient access to these medications.

When asked whether the antiviral would be affordable, O’Day declined to answer. He said he couldn’t comment yet because the drug’s effectiveness isn’t known.

“We have spent billions to develop antiviral expertise,” he said.

Other major drugmakers, including GlaxoSmithKline, Sanofi and Johnson & Johnson, are working on a vaccine. Still, because of the complicated testing process required to determine a vaccine’s safety and effectiveness, nothing is likely to be available until 2021.

“It will be at least 18 months … that is the best case” scenario, Paul Stoffels, M.D., vice chair of the executive committee and chief scientific officer for Johnson & Johnson’s, told reporters. Stoffels also declined to comment about pricing.

For more on what is known about possible treatments and vaccines, see this story in MarketWatch, this piece in Vox and this one in Stat News.

And for more on drug pricing and the coronavirus, see this story in Politico about how drug lobbying thwarted efforts to include drug pricing provisions in the recently passed legislation to fund a respond to the outbreak. Still, this story in the Washington Post suggests that concerns about affordability for drugs aimed at stopping the outbreak may be unnecessary.