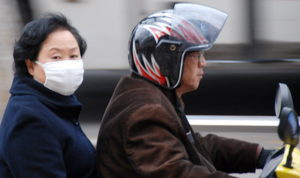 Photo: Let Ideas Compete via Flickr Wearing medical masks to help prevent disease is common throughout China and the rest of Asia.

The novel coronavirus from China that had infected at least 634 people as of early today has led some media to report about the potential of a pandemic.

Reporters localizing the story for their audiences should be able to answer these questions: When does an infectious disease outbreak become a pandemic, and is it likely with this virus? How worried should Americans be?

There are varying definitions among infectious disease experts, but generally, a pandemic describes a novel pathogen that is spreading rapidly between people, across international borders, with a potentially high mortality rate because people have little or no immunity to the disease.

Whether this coronavirus, now known as 2019-nCoV, will grow to pandemic from its epicenter in Wuhan, China is unknown. The U.S. Centers for Disease Control and Prevention has said that for now, the risk to Americans from the virus is low. A Washington state resident who recently traveled to Wuhan was infected, but there is no indication yet that he has spread it to anyone else.

Infectious disease experts tend to worry most about pathogens that spread between people via air droplets because they can be the hardest to curb. Respiratory diseases, such as influenza, spread through air droplets.

Andrew Joseph and Helen Branswell at STAT News have posted a good primer on what is known about the coronavirus. Julia Belluz this morning updated her useful explainer on Vox with the latest number of cases and additional details.

To stay on top of the outbreak, infectious disease reporters, like the Center for Infectious Disease and Research’s Lisa Schnirring, recommend following credible reporters, experts and public health organizations on Twitter. Take a look at Schnirring’s recommendations published in AHCJ on Jan. 10, which include STAT’s Branswell and FluTrackers.

Journalists should be mindful of the likely spread of misinformation on social media, as occurred during the Ebola outbreak, cautions Ron Klain, the White House Ebola response coordinator for President Obama, in a January 22 Washington Post op-ed. During the 2014 Ebola outbreak, media and politicians spread incorrect information about the disease, which led to unfounded overreactions and panic.