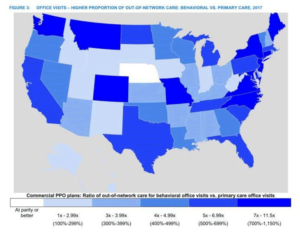 Source: “Addiction and Mental Health vs. Physical Health: Widening disparities in network use and provider reimbursement,” Milliman, November 2019.In a recent report on the level of parity between care for patients with mental health versus physical health conditions, actuaries from Milliman reported which states (shown in white and light blue) have the highest rates of parity and which states have the lowest rates (darker and deep blue). One of the strengths of the report is that it has data on parity for each state.

A recent report indicates that health insurers are failing to comply with mental health parity laws for people with employer-sponsored health coverage and their families.

In the report, “Addiction and Mental Health vs. Physical Health: Widening disparities in network use and provider reimbursement,” actuaries from the consulting firm Milliman document wide disparities in access to behavioral health care services for employees, family members and retirees with health insurance through an employer.

The report shows that disparities between physical and behavioral health care for both in-network access and provider reimbursement rates are making it harder for Americans to find affordable and available mental health care and addiction treatment. The report is an update of one Milliman did in 2017 and shows that since then, conditions have worsened. Commissioned by the Bowman Family Foundation, the report covers 37 million employees and their dependents in all 50 states and is based on data from 2013 to 2017.

Writing for Kaiser Health News, Jenny Gold pointed out in her article that individuals in the study had insurance through a preferred provider organization (PPO) plan. By design, PPOs allows individuals to go to any provider for care, whether in-network or outside. But going out of network may require a higher copayment. The headline on Gold’s article summed up the findings succinctly, “Affordable mental health care? It’s getting even tougher to access.”

Gold has covered mental health parity for years and puts the report into context by citing data from the federal Centers for Disease Control and Prevention, showing that in 2017, 70,237 Americans died from drug overdoses and 47,173 died from suicide. She also cites statistics from the National Alliance on Mental Illness (NAMI) that show that last year, 20 percent of adults experienced a mental illness.

The Milliman report and its predecessor show that health care journalists have an opportunity to continue to cover the failures of health plans to provide true mental health parity as required under state laws and the federal Paul Wellstone and Pete Domenici Mental Health Parity and Addiction Equity Act of 2008. Journalists also should cover the failures of regulators to enforce these laws.

Here are some of the top-line findings that Gold cited: