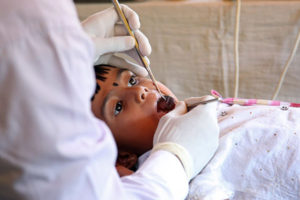 In the first article in a two-part series, led by researchers at the University College London and published by The Lancet, members of the team explore the extent of the epidemic, which burdens nearly half the world’s population.

And in the second, they make a case for “radical action” to transform the world’s approach to promoting oral health and combating oral disease.

The publication comes in the weeks leading up to a United Nations High-Level Meeting (HML) on Universal Health Coverage, slated for Sept. 23 in New York.

A dramatic re-thinking of oral health care should be part of the growing movement to promote universal health coverage worldwide, according to the authors, 13 academic experts from 10 countries.

One major challenge lies in integration of services, they acknowledge. In health care systems worldwide, dental care typically is disconnected from the rest of health care, they write. The fragmentation has complicated access to dental care and inhibited meaningful reform.

“Rather than being isolated and separated from the mainstream health-care system, dentistry needs to be more integrated, in particular, with primary care services,” they write. “The global drive for universal health coverage provides an ideal opportunity for this integration.”

The barriers remain formidable. But in attempting to move toward oral health integration and universal coverage, a handful of forward-thinking countries may already have lessons to share, they write.

“Bold efforts in Brazil and Thailand have demonstrated that major reforms are possible and can benefit oral health. Countries like France have embraced the principles of universal health coverage and are now changing their systems to include oral healthcare in innovative ways.”