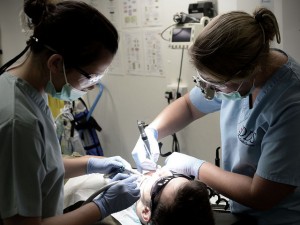 In the years since the passage of the Affordable Care Act (ACA), California has employed Medicaid expansion and the state health insurance marketplace – Covered California – to dramatically increase health care coverage.

The resulting lack of access to dental care exacts a particular kind of suffering, report Yesenia Amaro and Nicole Hayden in a recent story, one of more than two dozen articles so far that are part of a series called Uncovered California.

The project, led by the University of Southern California Center for Health Journalism News Collaborative, offers reporters from news outlets across the state the chance to focus on the plight of the uninsured.

“The severe pain struck when Christian Ortega’s lower left molars decayed, causing one molar to break,” they write. “The pain was so bad that one day he had to skip his shift as a cook.”

Ortega, who did not have dental insurance, scheduled an appointment at a local dental office but decided to forgo treatment after concluding that he could not afford to pay the $4,000 estimated bill.

“I was dealing with pain because I had no money to go and get it taken care of,” said Ortega. He eventually found services at a free clinic in Fresno.

The 32-year-old father’s experience serves as a reminder of a far larger need in the state.

An estimated 5.2 million Californians, representing 14% of the state population, lack dental benefits, report Amaro and Hayden. Some are workers whose employers do not offer dental benefits. Many more are elders, covered by Medicare, which has never included routine dental coverage.

“One of the state’s 2.5 million seniors without dental insurance is Kai Kingsley of Palm Springs, a 72-year-old veteran who lives off Social Security and some money from selling his paintings,” Amaro and Hayden write.

Like Ortega, Kingsley obtained care at a free clinic but not before experiencing hurt and fear.

“It was so painful and worrisome knowing I needed care but couldn’t afford (it) no matter how much I saved up,” he said. He was so grateful to find the services he donated one of his paintings to the clinic that served him.

And while last year, California restored adult dental benefits to its Medicaid program for poor residents, some of the beneficiaries are not aware that they now have coverage. Others face difficulties finding dentists who participate in Medicaid, Amaro and Hayden write.

The Uncovered California project includes participants from newspapers from the McClatchy Corp., Gannett Co., Southern California News Group, and La Opinion, as well as broadcasters at Univision and Capital Public Radio. For more of the collaborative’s coverage, including a new story on how improvised school health clinics are bringing routine and preventive medical and dental care to California children, regardless of their legal status, see this link.