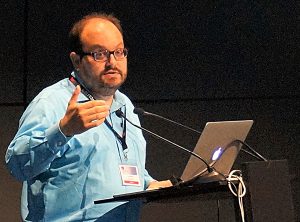 Len Bruzzese/AHCJAHCJ board president Ivan Oransky, M.D., spoke on a panel about “Reporting on scientific fraud around the world” at the World Conference of Science Journalists in Lausanne, Switzerland, on July 2.

Ivan Oransky, M.D., president of AHCJ’s board of directors, and Maryn McKenna, an AHCJ board member, were among the speakers at the World Conference of Science Journalists in Lausanne, Switzerland, on July 2.

Oransky, who is vice president, editorial at Medscape and Distinguished Writer In Residence at New York University’s Arthur L. Carter Journalism Institute, spoke about reporting on scientific fraud, something he regularly covers for Retraction Watch. 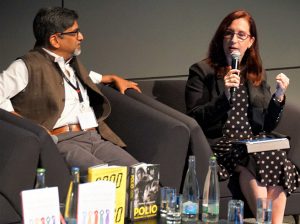 Len Bruzzese/AHCJAHCJ board member Maryn McKenna spoke on a panel about “Writing and selling the 21st-century science book” at the World Conference of Science Journalists in Lausanne, Switzerland, on July 2.

McKenna, author of “Big Chicken: The Incredible Story of How Antibiotics Created Modern Agriculture and Changed the Way the World Eats” (National Geographic 2017) and “Superbug: The Fatal Menace of MRSA” (Free Press/S&S 2010), discussed “Writing and selling the 21st-century science book.”

AHCJ has been a member organiza­tion of the World Federation of Science Journalists, which produces the conference, since 2013.