In her book, “Bottle of Lies: The Inside Story of the Generic Drug Boom,” Eban reveals how generic drug makers not only help ensure that some of the worst quality drugs enter the least regulated markets but also take extreme measures to avoid regulatory scrutiny. Harper Collins/Ecco’s Hardcover division published the book on May 14.

As David Dobbs wrote in his review of Eban’s book in The New York Times, the generics industry has harmed and sometimes killed patients by erecting facades of legitimacy to fool regulators. “This booming industry, with most production coming out of lightly regulated plants in India and China, is pumping bad medicine into unsuspecting patients in every corner of the globe,” he added.

As most health care journalists know, health insurance plans place generic drugs on their preferred tiers to contain costs. Such tiered pricing contributes to an estimated 90 percent of all consumer spending on prescription medications going for generic drugs, according to some estimates.

A contributor to Fortune magazine and an Andrew Carnegie fellow, Eban shows how generic drug companies seek to cut costs and boost profits by falsifying data and avoiding principles of safe manufacturing, as Jonathan Lambert has reported for NPR. Intense demand for generics has created a gap between what regulations require and how drug companies behave, he wrote.

Based on a tip, Eban began investigating the issue of generic-drug quality in 2008. That led to a series of magazine articles in Self and Fortune and eventually the book project, which she began in 2014, she said in an email to AHCJ. For three years, AHCJ member Sony Salzman worked as Eban’s research assistant. 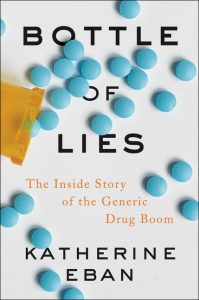 Since 2008, Eban has interviewed more than 240 sources in four continents, as Anna Werner reported for CBS This Morning. Eban spoke with industry whistleblowers, inspectors and drug-company regulators. She also obtained more than 20,000 confidential FDA documents and thousands of generic drug company records.

In the book, Eban outlines the health consequences that patients can suffer from taking substandard generics that may not dissolve properly, do not contain sufficient active ingredients or have toxic impurities. She also explains how the FDA has buried or downgraded investigators’ reports of extremely poor manufacturing practices and quality. The FDA often gives manufacturing sites outside of the United States weeks of advance notice of upcoming inspections, allowing companies to conceal substandard conditions, she wrote, whereas in the United States such inspections are almost always unannounced.