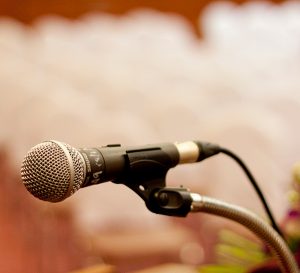 An estimated 48 million Americans listen to podcasts weekly, according to a 2018 survey from Edison Research, with the average consumer listening to seven different podcasts a week. So, the time is ripe for you to set up a mic and start your own health care podcast.

On Thursday, the Health Journalism 2019 panel, “Health podcasting: How to turn your in-depth health story into an audio narrative or series,” taught attendees just exactly how to do that.

Five veteran journalists in the world of podcasting sat on the panel. Moderator Karen Brown, whose career spans more than two decades, has been a full-time radio journalist for New England Public Radio since 1998. In 2018, Brown co-produced a five-part narrative podcast, “The Great God of Depression,” with panelist Pagan Kennedy, for PRX’s Radiotopia. Kennedy is an author and freelance journalist who is a contributing opinion writer for The New York Times.

Dan Weissmann is an independent multimedia journalist in the Chicago area. His work has appeared on outlets such as Marketplace, 99 Percent Invisible and NPR. Since July 2018, he’s produced and hosted Arm and a Leg, a podcast about the costs of healthcare. Laura Beil is a print journalist from Texas who hosted and reported Wondery’s “Dr. Death” series.

Panelist Kerry Donahue is the director of training for PRX.

While the panel touched on all aspects of podcasting, such as producing and pitching, presenters focused mainly on the difficulty of producing podcasts.

Donahue spoke about three decisions all podcasters should make early on in the planning process: What’s the format, what’s the frequency and what’s the length. She also talked about making sure your topic was niche enough.

A crucial question to ask yourself before launching: Exactly who is your audience?

The panelists also spoke of the surprises they encountered while making podcasts. Although Radiotopia funded Kennedy’s project, inital funding is never quite enough. “We had $25,000 and that money just vanished so quickly,” she said after the panel.

Beill, who did not have a lot of audio experience before “Dr. Death,” said her challenges included molding herself as a character in the podcast, drawing people along and being quiet in interviews. While that last one is hard, she said, “There’s a lot of power in quietness.”

The panelists hoped to help freelancers and staff journalists understand how develop an idea into a piece that goes beyond a single story, Brown said, as well as how to translate a print story into audio.

The last 20 minutes of the panel was dedicated to audience questions. One woman asked about voice.

Donahue said that podcasts are a “very intimate and very companionable” medium. You no longer need to use an NPR-like tone, but you should learn to write for your conversational voice.

“Don’t try to sound like your favorite podcaster,” Beil said.

Kennedy advised having someone in the studio you trust to give you honest feedback about how your voice sounds. She noted that she had been shocked with how preeminent the voice is when podcasting.

“The raw physicality of your own voice becomes so important,” she said.

In order to sound more conversational and not run out of breath, Donahue advised using short sentences and fragments.

Weissmann said she prepares through conversations with friends. “I prewrite by talking to my friends.”

Want some inspiration? Here are some health podcasts to try out: