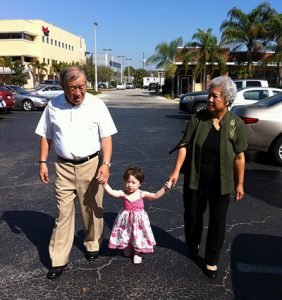 As a brand-new grandmother, I’m overjoyed to welcome our new baby girl into the family. Of course, I think she’s absolutely perfect. But beyond the emotional high of holding this tiny being, it turns out that research shows that grandparenting can be a boon to older adults’ health.

Grandparenting can relieve stress, improve socialization, encourage physical activity and even boost longevity. In one analysis, researchers examined data from more than 500 people ages 70 and older, who took part in the Berlin Aging Study. They found that seniors who provided some care, whether for their grandchildren or others, had a lower risk of death over a 20-year period than those who did not help others. (Grandparents who were primary caregivers for grandchildren were not included in the study.)

Caregiving not only provides physical and emotional rewards but also improves cognitive stimulation, according to Ronan Factora, M.D., a geriatrician at Cleveland Clinic who was not involved in the study.

As Lisa Esposito reported in U.S. News and World Report, the emotional ties between grandparents and grandchildren can protect against depression. A Reader’s Digest article touts several other health benefits of grandparenting, such as a stronger immune system and a stronger sense of purpose.

These benefits seem to exist throughout the world. A study of European grandparents found that even after earlier life, health and socio-economic conditions were taken into account, a strong positive association was found for the long-term benefits of grandchild care and health. Interestingly, significant association was found only for grandmothers, not grandfathers. CBS News reported on an Australian study published in the journal Menopause, showing the brain health benefits of grandmothers spending time with grandchildren.

Grandparents are uniquely positioned to impact the lives of their grandchildren, according to Vivek Nazereth, M.D., a family medicine practitioner with Sharp Health in San Diego. That’s because when people do things out of choice and not of need, their approach, attitudes and interactions are much more positive, leading to better outcomes.

These advantages are specific to grandparents who choose to interact with their grandchildren and may not apply to those who are full-time caregivers or custodians. Pew Research reported that as of 2011, more than 2.7 million grandparents not only live with a grandchild but also serve as the primary caregiver to that child. That marked a 12 percent increase from 2000. This post from the U.S. Census Bureau further breaks down the data by race and ethnicity. While some older adults who are primary caregivers enjoy positive health benefits many do not, as this study points out.

But if people are lucky enough to live near their grandkids and can find and maintain a healthy balance of caregiving without getting to the point of becoming overwhelmed, the rewards for both grandparent and grandchild can be boundless.

Journalists may want to explore: