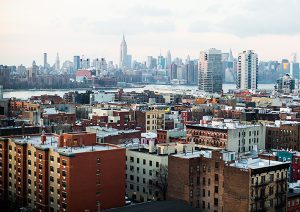 Cities provide unique views on the concentrated nature of how policies play out in the everyday lives of their citizens. Attendees at AHCJ’s Urban Health Journalism Workshop in October were treated to an overview of the Big Apple’s public health initiatives and efforts to address disparities, as part of the workshop’s opening session.

New York City’s health department is the oldest in the United States, with a 350-year history of improving important health issues like sanitation, hygiene, housing overcrowding and communicable diseases. More recently, the city’s health efforts concentrated on the intersection of chronic diseases and health outcomes.

For the past five years, it’s been looking at health through more of an equity lens, talking about social determinants and the intersection of prior initiatives, according to Oxiris Barbot, M.D., acting commissioner of the New York City Department of Health and Mental Hygiene (DOHMH). Barbot most recently served as the first deputy commissioner and oversaw development and implementation of agency priorities, including Take Care New York 2020, the City’s data-driven health agenda focused on addressing the social determinants of health and engaging communities on the issues of health equity.

“One of the things that we are focused on is really surfacing the way in which the historical legacy of racist policies still play out in communities,” she said. Barbot, who was a pediatrician in Washington, D.C., and previously served as commissioner of health for the city of Baltimore, says she saw the results of these policies firsthand. “Whether it’s in New York City, whether it’s in Baltimore, and D.C., across the country, in most instances, you can overlay the maps of areas that had been redlined way back in the [19]30s, [19]40s and those will be the same as areas with the worst, racially-based health inequities.”

She emphasized that a neighborhood’s impact on health holds true whether it’s disparities in diabetes, in infant mortality rates, teen pregnancies, or other health conditions. The worst problems overlay with redlining boundaries. (We previously reported on this issue here). That’s still playing out today, she told attendees.

Currently, the DOH is looking at the effects of the social political context we’re in and how that effects health outcomes. They conducted a study examining the role of gentrification in the health of communities. It compared health outcomes of individuals who lived in communities that were rapidly gentrifying, and who were displaced with those in non-gentrifying neighborhoods. They found that individuals who were displaced had a 10 percent increase in emergency department visits and a 30 percent increase in hospitalizations, and that the increase for mental health-related visits went up by 8 percent.

“We’re very interested in focusing in on the intersection of health and housing, because when we look at the data, that really is an area that we think holds promise for getting better health outcomes faster, it has relevancy to the bottom line for health care delivery systems that are focused on meeting Medicaid district requirements, for value-based payments,” Barbot said.

The DOH also wanted to learn how to build communities that support health in a more intentional manner, she said. One way is to examine the impact of the built environment on diabetes control, For example, how does the fact that your community is not walkable is or is not safe does or doesn’t have access to fresh fruits and vegetables, impact the ability to control diabetes on a population level?

“What we found was that in communities where individuals had more access to fresh fruits and vegetables, where they felt safer to go outside and walk, they were able to get their glucose under control faster than folks who lived in communities where those conditions weren’t in place.” That has implications for health expenditures, for well-being, and gives the health department measures to determine success when bolstering those components.

Reporters covering urban health can ask the same questions in their own communities. While perhaps the problems are not on the same scale as New York City’s, similar challenges exist everywhere.

New York City offers journalists a treasure trove of data to assist with reporting. The Open Data portal has datasets on everything from motor vehicle collisions to citywide payroll data. The Environment and Public Health Data tracking system collects and analyzes information on issues like the built environment, air and water quality, food inspections, health behaviors and population data. Epiquery is an interactive website with information on child health, recent community health surveys, communicable diseases surveillance, and the World Trade Center health registry, among others. Your city may provide similar data to kickstart your urban health reporting.