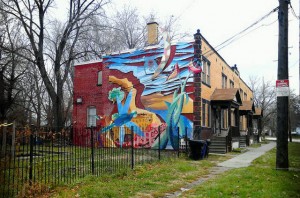 Photo: farrellink via FlickrA colorful urban mural brightens a street in the Hough neighborhood of Cleveland.

What has the greatest impact on a person’s health?

Nowhere is that more apparent than in Cleveland’s Hough neighborhood, a poor, mostly African-American community on the city’s east side, according health experts who spoke on the Health Journalism 2016 panel, “The tyranny of geography: place, race, and the social determinants of health.”

Residents of Hough (pronounced “Huff”) have an average life expectancy that’s 24 years shorter than those in higher income, white neighborhoods just 8 miles away. A new study in JAMA further substantiates the association between life expectancy and income.

Edward M. Barksdale Jr., M.D., surgeon-in-chief, University Hospitals Rainbow Babies & Children’s Hospital, said that when he moved to Cleveland from Pittsburgh eight years ago, he was “appalled” by the level of violence against children and teens he encountered. “My office shares a ZIP code with this community,” he said. “It became a call to action to address the root causes of this violence,” because, “too many children and teens were dying all around me.”

The hospital supports a community outreach called “Operation Focus,” which has helped to dramatically decrease the level of violence in only two years. “Most of these perpetrators were hurting – from poverty, lack of opportunity, lack of education. They weren’t sociopaths,” said Barksdale, who believes violence is the most important health care issue in urban environments.

Violence, poor health, and poverty are intimately intertwined, but the cycle doesn’t have to continue. Health, especially in communities like Hough, must be redefined, to include the role of geography,” he said. “Geography equals destiny for too many.”

Communities like Hough face significant challenges in reaching the homeless and very low-income populations. Although Hough borders both the Cleveland Clinic and University Hospitals, many residents tend to believe these institutions were for “rich” folks from the suburbs,” said Kate Nagel, administrative director for Care Alliance, which operates four non-profit standalone clinics that are federally qualified health centers (FQHCs). Their teams reach out to the community’s most vulnerable residents.

“Seventy percent of our folks claim 0 as income,” she said. Care Alliance provides comprehensive care to all residents regardless of insurance or immigration status. “We recognized that the most important aspect of care is to check prejudice at the door,” Nagel said. Everyone deserves quality care, and that requires removing barriers like access. They worked closely with community leaders to determine which services were most needed.

Even so, it often takes some convincing to get locals to come in. Other clinics in the past had come in, then left, after the money ran out. Care Alliance is different, said Central neighborhood resident Delores Gray, who began as a patient and is now a Care Alliance community engagement coordinator. She is sure that these clinics are the best answer for many residents’ health needs. “Many in our neighborhood have low income or no jobs. But these clinics show that keeping people healthy, not money, is important. They’re there for everyone.”

Care coordination is another critical piece of the puzzle. Right now, health care works in too many silos and is fragmented, said Sarah A. Redding, M.D., M.P.H. , and co-founder of the Community Health Access Project. “We have to look at the comprehensive issues that comprise urban health and identify the risk factors.”

As panel moderator Brie Zeltner has reported for the Cleveland Plain Dealer, creating care pathways ensures that every resident gets the right care, at the right time, from the right provider or city agency. It may be housing, nutrition, dental care, primary or home care, transportation or anything else residents may need to maintain health. “The Hub is like air traffic control,” Redding explained. They take a holistic approach which pays off with improved outcomes.

Often, people don’t know what services are available or how to access them. Coordinating case management of everything from prenatal checkups to assistance with activities of daily living can avoid duplication of services, ensure everyone gets the care they need, avoid preventable hospitalizations and produce better outcomes. It can narrow the disparities gap between rich and poor, urban and suburban. Redding said.

Communities like Hough exist around the country.  This New York Times interactive map shows the difference in life expectancy between rich and poor, which is all too often a race-based statistic. It takes collaboration from all stakeholders – residents, providers, non profits, government, businesses – to make a difference.

“We’re good at throwing money at health, but not in attacking the root causes,” Barksdale said, adding that it’s “unconscionable” that these kinds of disparities still exist and that it is time for the health system to recognize and deal with them.