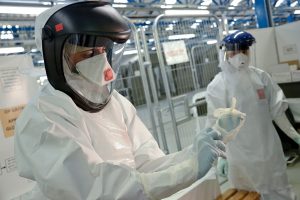 During an infectious disease outbreak, how does a journalist provide accurate information about risks to the public as the event is unfolding?

Explain what is known and unknown at the time about the threat, and put the risk in context to risks that people assume daily, suggests Anthony Fauci, M.D., director of the National Institutes of Health’s National Institute of Allergy and Infectious Diseases.

“During the Ebola outbreak, we admitted two patients infected with the virus to the NIH Clinical Center,” Fauci recounts in a perspective posted on the NIH’s newly redesigned Science, Health and the Public Trust site. “People would ask me, ‘My goodness, aren’t you putting us at great risk?’ So I would ask them, ‘how did you get to a work this morning?’ They would answer something to the effect of, ‘well I got on the Beltway and drove to the NIH,” This is a high-speed road that encircles Washington. I would point out, ‘Well your commute posed a greater risk to you than an Ebola patient at the Clinical Center.”

Fauci goes on to note that when confronted with new or reemerging infectious disease risks, human nature is to consider that new risk to be a greater threat to their life than the risks that humans already live with daily.

“We in the public health sector must be crystal clear in articulating exactly what we know and what we still need to know about the threat, and in helping people understand how this new risk compares to risks they willingly assume every day,” said Fauci.

Fauci’s perspective, first written in 2016, was posted as part of the NIH’s relaunch of the Science, Health and the Public Trust site, which is aimed at helping journalists and communicators to accurately and clearly convey complex research and scientific information.

In mid-October, Heidi Larson, head of the Vaccine Confidence Project, an academic research group based at the London School of Hygiene & Tropical Medicine, authored an article: “The Biggest Pandemic Risk? Viral Misinformation.” Larson, a professor of anthropology and risk and decision science, argues that because of misinformation on social media, an increasing number of people discount the risk of vaccine-preventable diseases, like the flu, even though an estimated 80,000 people died of the virus in the U.S. during the most recent flu season.

She says that people are likely underestimating such threats because of the deluge of conflicting information, misinformation and manipulated information on social media. This trend should now be considered a global public health threat, as vaccination rates in Europe have fallen in conjunction with the rising amount of misinformation online, she says.

“I predict that the next major outbreak – whether of a highly fatal strain of influenza or something else – will not be due to a lack of preventive technologies,” wrote Larson in Nature. “Instead, emotional contagion, digitally enabled, could erode trust in vaccines so much as to render them moot.”

What journalists can do is connect with sources that assess infectious disease threats, before there is an outbreak, in order to help put the risk in context. This was a point made to reporters attending a panel on pandemics at the Association of Health Care Journalists conference in Arizona this year.

“As reporters, we are a small slice of the media, but when it comes to outbreaks or the threat of outbreaks, we have a responsibility for not just truthfulness but also precision in reporting,” infectious disease reporter and author Maryn McKenna told attendees at the conference.