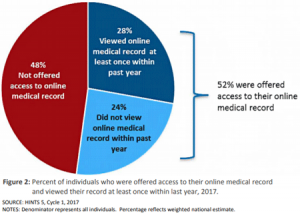 Patient portals — those consumer-facing websites that enable patients to access their medical information securely and communicate with their doctor — have been around for at least 15 years. But with a few exceptions, they end up becoming dead zones. Why?

Let’s look at the facts, collected in a data brief published this spring by the Office of the National Coordinator for Health IT (ONC):

So when people use patient portals, they tend to like them. However, they don’t come back more than once a year, and getting them to log in at all is pretty tough. That’s even though online access to medical records grew by 24 percent between 2014 and 2017, according to the ONC, which has published a “playbook” to guide health care providers in engaging patients and building useful portals.

What’s the big deal if patients don’t use these portals? For one thing, patients who are engaged in their care tend to have better health outcomes and lower costs, studies have indicated. And patient portals are widely viewed as tools to improve patient engagement and strengthen the provider-patient relationship.

The 21st Century Cures Act of 2016 includes provisions to make it easier for patients to access their medical records and for trusted providers to share them. The ONC developed a patient engagement playbook and a consumer guide on how people can obtain their health information online. The playbook has a section on activating features of a patient portal that people want and need, such as scheduling appointments, emailing doctors, refilling prescriptions and sharing medical notes.

Getting patients to log onto and frequent a patient portal depends on a variety of factors, according to a  2015 study In the Journal of Medical Internet Research. Patients are influenced by age, health literacy, ethnicity, education level and caregiver role. An endorsement by a person’s physician and the usability of the site also are factors, according to the study.

Older patients, regardless of health literacy level, are interested in using a patient portal, but some “don’t want to feel pushed into anything“ while others say “somebody needs to help me,“ according to another JMIR study in 2017.

Usage and frequency of use of patient portals, put into context, is abysmal. Let’s remember that nearly nine in 10 Americans are online; Facebook has 214 million users in the United States and 77 percent of Americans own a smartphone.

Many in Silicon Valley have tried and failed to fix the online medical record problem, including Google, Microsoft and Apple. The latest venture gaining buzz is called “Ciitizen” and you can learn about it in this story by CNBC’s Christina Farr.

Here are some questions to answer when reporting about this topic in your community: