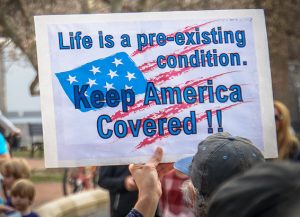 Photo: Ted Eytan via FlickrA sign from a 2017 rally in support of the ACA in Washington, D.C.

The latest anti-Affordable Care Act lawsuit from a score of conservative state attorneys general – partly backed by the U.S. Department of Justice – brings protections for people with pre-existing conditions squarely back into the political and policy forefront. (And you should expect this lawsuit and pre-existing condition protection to come up in the Senate confirmation hearings for Brett Kavanaugh in early September).

So how many people really do have pre-existing conditions who are vulnerable to losing coverage?  And where are they?

The Kaiser Family Foundation has just published a helpful map, by metropolitan area, and an issue brief that contains state-by-state data that’s useful for reporters. Overall, the number is around 52 million people (drawing from 2015 CDC data). As expected, rates vary with age – about 15 percent of people age 18-24, versus 47 percent for those age 60-64.

In some parts of the country more than one-third of non-elderly adults have a pre-existing condition. (Older adults are covered by Medicare). Those higher rates tend to be in the southeast (Kentucky, Alabama, Mississippi, West Virginia).

Lower rates are found in Alaska, Washington, DC., New Jersey, Utah, Colorado, and Minnesota (though there is variation within states).

A long list of conditions and diseases can be considered pre-existing conditions. Among them are  HIV/AIDS, arthritis, cancer,  heart disease, diabetes, severe obesity,  pregnancy, hepatitis and sleep apnea.