View all posts by Valarie Basheda → 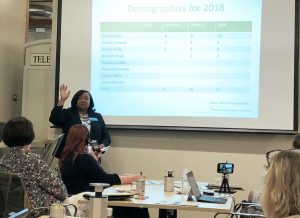 Death by suicide is on the rise and is the second-leading cause of death for people ages 10 to 39. In some cases, especially with children younger than 18, the media may shy away from covering these tragic deaths.

That’s not the correct approach, says Trebor Randle, special agent in charge with the Georgia Bureau of Investigation.

Randle works in the Child Fatality Review Unit of the GBI. She investigates every case when a child dies by suicide under the age of 18. She often uncovers warning signs that parents, teachers and friends may not have recognized at the time.

“Suicide is preventable with intervention,” Randle said at a panel discussion “Responsible Reporting on Suicide,” hosted Aug. 16 by the Atlanta chapter of the Association of Health Care Journalists. She wants journalists to help educate people about suicide and its warning signs. But that reporting must be done responsibly, she says. 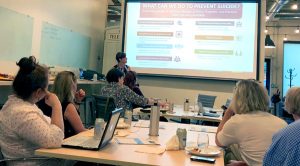 Photo: Sonya CollinsDeb Stone, behavioral scientist in the Division of Violence Prevention at the Centers for Disease Control and Prevention, explains measures to prevent suicide to members of AHCJ’s Atlanta chapter.

Deborah M. Stone, a behavioral scientist with the CDC, agrees. Stone was the lead researcher on the CDC’s latest suicide trend report, which came out the same week as the highly publicized deaths of chef Anthony Bourdain and designer Kate Spade.

The report found the suicide rate increased nearly 30 percent from 1999 to 2016 – including all age groups except people over 75. More than half of the people who died by suicide did not have a known mental health condition.

Stone said suicide is just the tip of the iceberg. While more than 43,000 people died by suicide in the U.S. in 2016, millions more had thought about suicide or attempted it or landed in the emergency room.

Although no single event generally leads to death by suicide, Stone cited these factors that may contribute to it. Many people had more than one of these issues:

Randle says that in Georgia, 24 people under the age of 18 have died by suicide so far this year. Half of the kids had been touched by the system in some way, such as foster care or the courts, and family discord is a top problem for kids. Half of the children had voiced suicidal ideations in the past and some had been taking medication.

She doesn’t want to alarm people and says no one thing means a child is at risk. But if a child already has known issues and then shows signs, people should seek help immediately.

Some of the signs include:

It can be easy for adults to dismiss or make light of issues that bother their children. Don’t, says Randle.

“A young person’s perception is their reality,” she said. 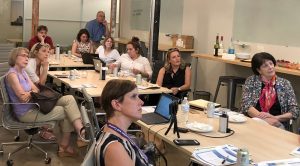 Stone shared recommendations for reporting on suicide developed by a consortium of researchers and suicide prevention experts, journalism organizations, the CDC and others. Research shows that certain types of news coverage increase the likelihood of copycat suicides.