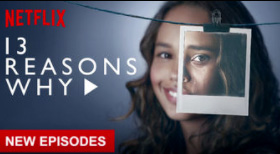 The second season of 13 Reasons Why, a controversial teen drama TV show, premiered May 18 on Netflix. Throughout its first season, loosely based on the award-winning book by Jay Asher, the show dealt in great detail with the suicide of a high school student, including its precursors and its aftermath. Now, the show has already drawn criticism for a rape scene this season.

These are tough topics to discuss and write about, especially while being sensitive to rape survivors, those left behind from a suicide and those at risk for suicide. AHCJ has a number of resources journalists can check out if reporting on suicide and sexual assault, particularly in terms of data and tip sheets for responsible, ethical coverage.

The language journalists use when reporting on these topics can have substantial ramifications given the research on copycat suicides and the stigma associated with both topics. Anyone interviewing survivors related to either topic (or both) should also be aware of appropriate and harmful ways to ask questions and refer to those interviewed.

A quick skim of the tip sheets can help journalists write articles that not only deal sensitively and responsibly with the topics but also model appropriate coverage for others reporting on it.