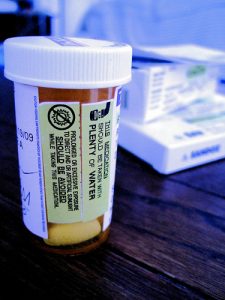 Health and Human Services Secretary Alex Azar and Centers for Medicare & Medicaid Services Director Seems Verma are crisscrossing the country to tout the Trump administration’s plan to combat prescription drug prices. They promise that America’s Patients First, released by the president and HHS on May 11, will address significant roadblocks to lowering drug costs.

People age 65 and older account for 34 percent of all prescription medication use and 30 percent of all over-the-counter drugs purchased, according to this Medscape article. Azar, a former drug company executive, recently spoke with reporters and other stakeholders to promote the plan, saying that high prescription costs seriously threaten too many Americans’ health and wellbeing.

He called the administration’s proposed changes “more sweeping than any other drug pricing plan ever proposed.” (Here is a recording of the secretary’s remarks.)

Many of the ideas are part of an ongoing conversation between the government and the pharmaceutical industry, according to drug policy expert Adam Fein, Ph.D., CEO of the Drug Channels Institute. “They’re basically signaling to the industry they’re going to make a move and you better be prepared,” Fein said.

Rebates, discounts, generic drugs and pharmacy benefits manager (PBM) practices were among the issues highlighted in Azar’s talk. The proposal stops well short of allowing Medicare to negotiate directly with drug manufacturers for Part B drugs, those a patient would receive in a physician’s office (such as chemotherapy for cancer treatment). However, Part D – the pharmacy benefit – is managed by outside insurers. Medicare does have negotiating authority there, so moving some Part B drugs into Part D could be a way to lower prices of some of these high-ticket, often life-saving treatments.

Part D was created as part of the 2003 Medicare Modernization Act and has not been updated significantly since. Given the size of the aging population and the rising price of prescriptions something has to be done, Fein said in a phone interview. “There have been some unintended consequences that must be addressed, like warped benefit and incentive structures.” He pointed out that while the majority of the proposals under consideration will have significant impact on the industry, they are topics very hard for the average person to understand. Fein wrote this in-depth analysis of the new plan, which he mainly supports.

However, many elder advocates give the proposal mixed reviews, according to this Washington Examiner article. “It seems to signal that more will be done to scrutinize PBM arrangements, some additional transparency will be brought to bear on rebates and list prices, but I don’t see clear plans for making Medicare a more powerful negotiator – yet. Overall, the market is quite fractured and segmented, and that dynamic doesn’t look to change much,” wrote Anne Montgomery, deputy director, elder care and advanced illness, at the Altarum Institute, in an email.

Key points of the plan include:

Azar was clear that he thought the popular notion of importing drugs from Canada was “a gimmick” and would not work. Canada is too small and doesn’t have enough drugs to export to the United States. “The last four FDA commissioners have said there’s no effective way to ensure drugs from Canada are coming from Canada,” rather than counterfeit factory overseas, he added.

Another issue Azar mentioned was the need for pharmacy benefit managers (PBMs) to lift the “gag clause” restriction on pharmacists. He said some PBMs prevent neighborhood pharmacies from telling customers they could get a better deal on a drug, or a similar one, by paying cash instead of using insurance.

Fein insisted this is a rare occurrence, and while the existence of these gag rules has been widely reported, it’s not something that journalists should necessarily take at face value. “While one PBM did have this gag clause, other PBMs have strenuously insisted they do not. I haven’t seen very many journalists dig into some of the stories they’ve been told.”

When you look at the data, the vast majority of people – 90 percent to 95 percent of people – have anywhere from $0 to $300 in out-of-pocket expenses right now, according to Fein. While out-of-pocket costs are perceived as a big problem, in reality that’s only true for a small number of people. However, the fear of going bankrupt should something serious happen is very real. “People want to know if they’ll get the benefit they’ve been paying for,” he said.

Ensuring the average consumer understands their benefits continues to be a major challenge. Many do not grasp basics such as co-insurance versus co-pay or the out-of-pocket maximum. Fein cited United Health Care’s 2017 survey on consumer sentiment, and “the numbers are scary.” There’s a low level of sophistication and lots of misunderstanding among beneficiaries, he said. He encouraged journalists to take the lead in helping people understand how prescription coverage works.

This analysis by Katie Thomas of The New York Times provides other important takeaways from the proposal.

For a more in-depth discussion, check out this “What the Health” podcast from Kaiser Health News.