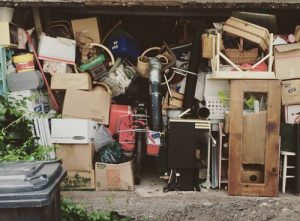 Many of us hang on to a few special items – like that ticket stub from your first concert, a seashell from your honeymoon, or artwork from when your kids were in kindergarten. Hoarders, however, go beyond saving a few memories and have a hard time letting go of anything. Hoarding is a legitimate psychological disorder and, if left unchecked, can upend an older adults’ life.

Their difficulty in getting rid of things causes their living spaces to become so cluttered that they are nearly unusable.

Without help, hoarding disorder (HD) can interfere with daily tasks such as cooking, cleaning, personal hygiene, or sleeping. It can lead to an increased risk of falls, problems with medication management, and exacerbation of health issues – all of which are particularly harmful to older people.

As this new AHCJ tip sheet explains, extreme clutter can create poor sanitary conditions, impair access to emergency services, increase the risk for fire, or get a person evicted. Additionally, HD often results in serious conflict with families and neighbors, according to the International OCD Foundation, a national group that works to reduce stigma around mental health issues.

Family caregivers of those with hoarding disorder may experience increased interpersonal conflict, chronic worry, depression or feeling as if they are unable to cope.  According to Hebrew Senior Life, a health and residential non-profit in Boston, hoarders often become unwilling to allow others in their homes even when they need help with activities of daily living, such as showering and cooking. The Geriatric Mental Health Association of New York reports that older hoarders even turn down services such as home-delivered meals because they may be embarrassed about the mess and don’t want others to see their space.

The Institute for Compulsive Hoarding and Cluttering estimates about 3 to 5 percent of all Americans (about 9 to 16 million people) have “problematic collecting behaviors.” It affects all socioeconomic groups and can worsen with age. We are not talking about things like stamps or baseball cards collections, which typically are contained, organized and manageable.

Compulsive hoarders acquire and keep overwhelming quantities of objects that to most of us have little or no real use or need. The thought of parting with these objects causes the hoarder significant emotional and psychological distress. Hoarders hang on to everything from old junk mail and hundreds of empty jars to years’ worth of newspapers and bobble-head dolls.

Many hoarders have trouble letting go of anything that has even the tiniest bit of perceived value – be it for sentimental reasons or “just in case” they might need it someday. Others take in animals – housing dozens of cats, birds, dogs or other pets – and become overwhelmed with the task of caring for them. This fast-tracks unsanitary conditions, creates numerous health hazards and puts the lives of both animals and owner at risk. Adult protective services, the health department, ASPCA, social service agencies or the courts may have to step in to remove the animals, force the person to clean up or even condemn the property if necessary.

Solving the problem of hoarding isn’t so simple. As this article from the Minneapolis Star Tribune explained, every county or town seems to have its own ordinances about hoarding, which makes enforcement challenging. As the Virginia Center on Aging noted, our aging population is increasing so it’s likely the number of people with hoarding disorder will increase as well.