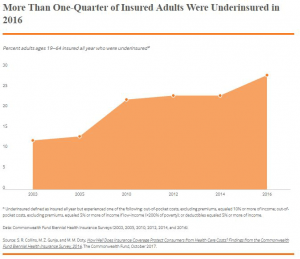 This year the rate of those who are uninsured has risen steadily, as the Gallup Sharecare Well Being Index shows. In the third quarter, the share of Americans without health insurance was 12.3 percent, according to Gallup’s most recent quarterly report.

After President Donald Trump announced that he would end cost-sharing subsidies under the Affordable Care Act (ACA), Danielle Wiener-Bronner covered the story for CNN and Jeffrey Young wrote about it for The Huffington Post.

Compared with the Gallup survey, the National Health Interview Survey from the National Center for Health Statistics Centers is slower to show such trends. As we reported last month, the NHIS’ most recent report showed the uninsured rate last year was a historic low of 8.8 percent.

Andy Miller, CEO and editor of Georgia Health News, points out why this is important, especially during the open enrollment season that began Nov. 1. “The underinsured are people who have health insurance (including employer and individual exchange plans) but face deductibles and health care costs that are high in relation to their income,” Miller wrote.

When signing up, many Americans choose plans that may have lower monthly premiums but often higher copayments, coinsurance costs and higher annual deductibles. Coinsurance is the amount an insurance requires an insured person pay (in addition to copayments and annual deductibles) before the insurance company will start paying for care. Many consumers need to pay these amounts during their first encounters with the health system in a calendar year. Under the ACA, the 2018 out-of-pocket maximum will be $7,250 for an individual and $14,700 for a family.

In addition to the out-of-pocket maximum, individuals and families need to pay their premiums, any amount a health insurer bills for out-of-network care and any spending for what is considered non-essential health benefits, such as eyeglasses or dietary supplements.

As Miller explained, the problem with being underinsured is that more Americans with health insurance are unable to keep up with those out-of-pocket costs. Increasing numbers of underinsured Americans mean that more people may be insured – but not fully covered.

Melissa Patrick of Kentucky Health News also covered the story about the underinsured, citing a Kentucky Health Issues Poll last year that showed nearly a third of adults struggle to pay their medical bills, whether they were insured or not, and 20 percent of adults delayed or skipped needed medical care due to the cost.

“Since 2015, larger shares of people with health insurance say they have a difficult time affording their health care costs: from 27 percent to 37 percent for premiums, 34 percent to 43 percent for deductibles, and from 24 percent to 31 percent for copays and prescription drugs,” the report said.