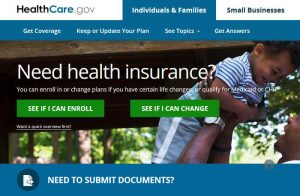 Buzzfeed’s Kate Nocera and Paul McLeod last week broke the story that the Trump administration – which has already cut the marketing and navigator budget for the coming shortened open enrollment season – is now pulling out of enrollment events across the country. Its 10 regional directors will not be helping with planning, a break from Obama administration practices.

They cited an administration source and an email sent to health advocates in Mississippi citing the policy change – a reversal from all previous years under the Obama administration. (Vox first reported on the Mississippi situation; Buzzfeed found out it was nationwide.)

HHS spokeswoman Caitlin Oakley told Buzzfeed: “Marketplace enrollment events are organized and implemented by outside groups with their own agendas, not HHS. These events may continue regardless of HHS participation.” She went on to say, “As Obamacare continues to collapse, HHS is carefully evaluating how we can best serve the American people who continue to be harmed by Obamacare’s failures.”

Roy Mitchell, the executive director of Mississippi Health Advocacy, was quoted as saying the group was canceling its pre-enrollment events and would focus on spreading the word without HHS’s help. Given that HHS messaging consists of slamming the ACA, it’s hard to imagine it would be much help on building support for enrollment this year.

“We’re regrouping, we’re restructuring, we’re wondering if we should go direct to consumer rather than trying to work with the navigators,” Mitchell was quoted as saying. The group is also exploring how to work with the insurance company in the exchange.

“I didn’t call it sabotage,” Mitchell told BuzzFeed. “But that’s what it is.”

The HHS move will affect every state that relies on Healthcare.gov to help consumers get coverage, so you should be checking with advocacy groups and any remaining navigators in your area to see what their strategy will be and see who plans to at least part try to fill the consumer outreach and education gap. Social media is free – it can raise awareness of how and when to enroll, but it can’t fill in all the gaps, particularly not with enrollment assistance.

Speaking of HealthCare.gov, HHS announced it would shut down the site for 12 hours on Sundays, a time when many working people shop for coverage. A few media outlets had that story, but I’m pretty sure it was Phil Galewitz who spotted it first.

(Editor’s Note: This post was written before the resignation of HHS Sec. Tom Price on Friday. Policies for the enrollment season are unlikely to shift dramatically under an acting HHS secretary with a month to go before sign-up season.)