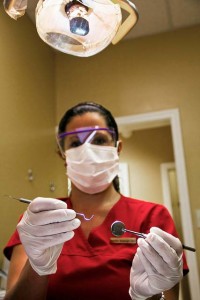 A Michigan legislator has renewed efforts to expand the state’s dental workforce to include dental therapists as a means to get more care to underserved communities.

A bill, introduced in September by Republican state Senator Mike Shirkey, would allow dental therapists to begin working in Michigan.

The technically-trained workers, sometimes compared to nurse practitioners, would provide basic preventive and restorative care such as filling decayed teeth as part of dentist-headed teams.

“By allowing a mid-level provider – a dental therapist – to practice, this bill could improve access to oral health care for underserved patients while giving dentists the ability to expand and modernize their practices,” Shirkey said in a statement. According to his office, 77 of Michigan’s 83 counties have at least one area with a shortage of dental providers.

Dental therapists, who are now working in tribal areas of Alaska, Washington and Oregon and throughout the state of Minnesota, take about half as long to train and cost about half as much to employ as dentists. Vermont and Maine also have approved the model to expand cost-effective care to communities that have chronically lacked it. Michigan is one of several states in the process of considering the model to broaden access to care. Fewer than half of America’s dentists serve patients covered by public programs such as Medicaid and poor and across the country, with more than 5000 communities federally designated as dental professional shortage areas.

Two years ago, the agency responsible for overseeing dental education in the United States announced it would establish a national accreditation process for dental therapists.

However, national and state dental groups have continued to oppose them strongly. Many dental organizations contend that the existing dental workforce is adequate to the nation’s needs. They also argue that no one but dentists should be allowed to perform what are termed “irreversible surgical procedures,” including drilling and extracting teeth.

The Michigan Dental Association called for “urgent” action against an effort last year to bring dental therapists to the state, Watchdog.org reporter Eric Boehm wrote in an account of the unfolding debate there.

Shirkey, who chairs the state senate’s health policy committee, maintains that bringing dental therapists to Michigan makes sense from both a public health and fiscal perspective.

“The legislature should be about ensuring those practicing in our state are qualified to provide care after those qualifications are met, we should get out of the way and let the market and consumers decide how that care is provided,” Shirkey noted. “There are dentists right now who want this help.”

Elsewhere, Minnesota nonprofit care provider Apple Tree Dental, working with the Pew Charitable Trusts, recently released a case study supporting the idea that most oral health needs of residents of a state veteran’s home could be met by dental therapists and advanced dental therapists offering on-site services. Dental therapists have been licensed to practice in the state since 2011.

The study looked at the productivity and cost-effectiveness of an advanced dental therapist working under the supervision of a dentist at the Minnesota Veterans Home. It concluded that most of the preventive, diagnostic and restorative dental procedures being performed at the facility under this arrangement were within the scope of practice of a dental therapist. Due to a dental therapist’ lower salary compared with a dentist, the therapist’s services resulted in savings to Apple Tree.