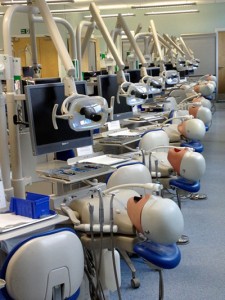 The agency responsible for overseeing dental education in the United States is moving forward with plans to establish a national accreditation process for dental therapist training programs.

In a move that was greeted with both criticism and praise, the Commission on Dental Accreditation (CODA) voted Aug. 7 to begin the accreditation process for programs to train non-dentists to perform certain dental procedures, including drilling and extracting teeth.

Such providers are already providing care on tribal lands in Alaska as well as in Minnesota. A number of other states are considering employing the dental therapists, who work as part of a team of providers supervised by dentists.

Advocates point out that the model has been used for years in many other countries, as a way of expanding dental services to poor, underserved and isolated communities.

But dental therapists are opposed by the American Dental Association. The group, which represents over 150,000 dentists, insists that only dentists should be allowed to drill and extract teeth.

“The ADA, while fully supporting CODA and its role in assuring high quality standards for dental education, remains firmly opposed to allowing non-dentists to perform surgical procedures,” the organization said in a statement following the CODA vote.

The ADA says that sufficient dentists are being trained to meet the overall needs of the nation, citing research by its Health Policy Institute (HPI). A 2014 HPI study, “Supply of Dentists in the United States is Likely to Grow,” predicts that the net gain in dentists over the next two decades will exceed the growth in the population. The paper stops short of assessing whether there will be adequate dentists available to serve certain segments of the population who often lack care, such as Medicaid beneficiaries and people living in rural areas.

When such factors are taken into consideration, the country will face an increasing shortage of dentists in coming years, according to a report earlier this year from the U.S. Department of Health and Human Services’ Health Resources and Services Administration.

Organizations that have pushed for dental therapists hailed the CODA decision as an important step forward for the workforce model they hope will expand care to poor and underserved populations.

He said implementation of standards will provide guidance to policymakers in at least ten states who are currently weighing the idea of putting dental therapists to work.

The organization that accredits dental schools and dental hygiene schools across the country has now set national standards for dental therapy and that signals the legitimacy of the provider profession in the U.S,” Koppelman said.

CODA began the development of the accreditation standards three years ago, at the request of the University of Minnesota, Kimber Solana reported in the American Dental Association News. In Minnesota, the state dental board is accrediting the education programs that are training the state’s dental therapists.