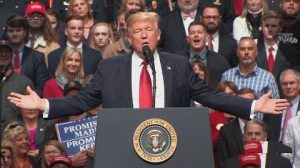 In my blog posts, I usually try to highlight stories that have a lesson – something that you can take and apply to your own reporting on health reform.

This story  by the Washington Post’s Jenna  Johnson doesn’t have such a clear-cut, practical “how-to” aspect. But I’ve found myself thinking about her opening anecdote again and again since I read it, so I figured it’s time to share.

The headline is: “Whom to trust when it comes to health-care reform? Trump supporters put their faith in him.” Maybe the lesson is – as you report, remember how hard it is for our readers/listeners/viewers to cut through the clutter. And how hard it is for people to change their minds once they’ve committed to a belief or set of beliefs.  Fake Facts have found a place.

Johnson went to Nashville for one of President Trump’s campaign-style rallies in March and met a woman named Charla McComic. Her adult son had lost his job. But he managed to stay covered – and his health insurance premium dropped from $567 a month to $88. McComic told Johnson that it was a “blessing from God” via President Trump.

“I think it was just because of the tax credit,” said McComic, 52, a former first-grade teacher who traveled to Trump’s Wednesday night rally in Nashville from Lexington, Tenn., with her daughter, mother, aunt and cousin.

The price change was actually thanks to a subsidy made possible by former president Barack Obama’s Affordable Care Act, which is still in place, not by the tax credits proposed by Republicans as part of the health-care bill still being considered by Congress.

It has been difficult for many Americans to keep up with the changes brought by Obamacare and exactly how the Republican proposal, if enacted, would affect their lives. But for Trump’s most dedicated supporters, it’s simply easier to trust the president is making things better and will follow through on his promise to provide “insurance for everybody” and “great health care for a fraction of the price.”

McComic’s son isn’t the only member of the family getting health benefits from the government. She’s on disability, and her granddaughter gets Medicaid. And she isn’t worried that any of it will change for the worse.

“So far, everything’s been positive, from what I can tell,” she told the reporter. “I just hope that more and more people and children get covered under this new health-care plan.”