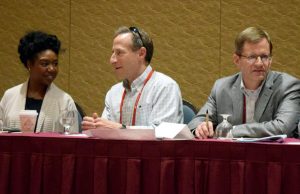 Each year, members in AHCJ’s professional category elect members for the association board of directors. (Associate and allied members cannot run for election or cast ballots.)

Six of the 12 director positions come up for election each year for two-year terms. Incumbent board members are allowed to run for re-election.

Service on the board is a serious commitment. It has commensurate rewards (but no pay). In addition to participating in two in-person board meetings each year and occasional conference calls, board members are responsible for making decisions about association policies and statements, as well as working with the executive director on training projects, financial matters and other efforts to achieve AHCJ’s strategic goals.

Board members take on committee duties and contribute to association activities, including fundraising, advocacy, helping plan sessions at training events, membership outreach and writing/editing contributions. They may be asked to play a role in other association projects that arise. They also are asked to show their support through an annual donation to the Center for Excellence in Health Care Journalism, although there is no minimum required.