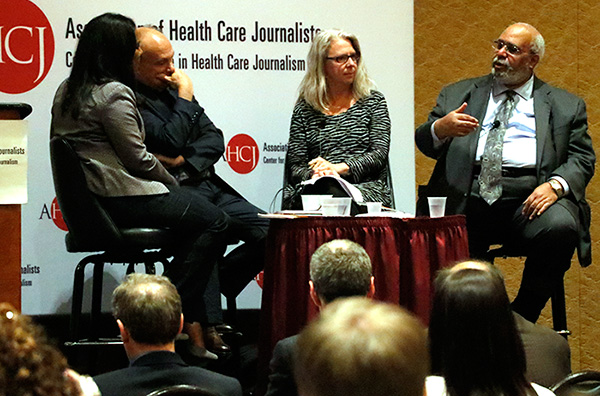 That was the provocative starting point of the Health Journalism 2017 kickoff roundtable: Violence as a public health emergency.

Gary Slutkin,  chief executive officer of Cure Violence, set the scene for us. We know the victim of a shooting has a health problem – the gunshot injury. But what about the shooter?  Does he or she have a health problem too? Perhaps an untreated health problem arising from exposure to violence?

And if we treat violence with tried and true public health measures does violence fall?

Slutkin says a growing body of research shows it does – and the decrease can be rapid and dramatic.

And as moderator Andrea McDaniels, health and medicine reporter at the Baltimore Sun, noted, a public health approach doesn’t just help to fight street violence, but also bullying and domestic violence. It takes effort – and persistent follow up so that the gains are durable.

“It causes more of itself,” Slutkin said. “Exposure is the issue.” That’s particularly true when the exposure comes in within adverse circumstances.

Community-based health workers – working within the community in ways that are acceptable to that community –  can serve as “interrupters.”  Through early detection and interventions that change behavior, they can break the cycle of exposure and contagion.

“Behavior change is the bread and butter of public health,” he said.

Georges Benjamin, executive director of the American Public Health Association, pointed out that violence generally doesn’t really come out of nowhere. “When we look back there were red flags all over the place … somebody knew,” he said. Having a way to detect and act on that red flag is key.

Intervening may be expensive, Benjamin added. But not intervening costs even more.

Rachel Davis, managing director of the Prevention Institute, said cities and school systems have begun to look at violence in new ways – not just as a law and order problem. “We’ve seen an evolution of how cities are dealing with it,” she said. Even law enforcement agencies, who initially looked at the public health approach as “soft,” are coming around in some communities. Every time attention turns to a public health problem, the first reaction is that solving it is “impossible” – but over and over again, public health problems do get solved or at least ameliorated, she said.

The panelists did not dismiss the importance of issues like poverty, inequality,  racism or the prevalence of guns – but they said that even with all those gnawing problems and their contribution to toxic stress, the public health approach to violence is proven and valuable.

Don’t just write a portrait of an individual, Davis said. Write about the context. “That will help the public really understand this in a way that’s more aligned with what the science and the practice says works.”

See tweets from the roundtable for more information.