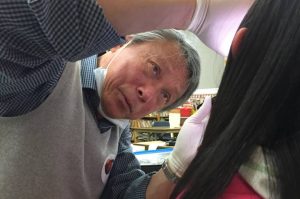 Laura Klivans/KQEDDentist Richard Choi volunteers his time screening students at San Francisco’s public schools for overall oral health. He grew up in the Chinatown and North Beach communities and likes revisiting schools he once attended.

Oral health has improved for the children of San Francisco in recent years. The decay rate among kindergarteners has fallen nearly 10 percent since 2008, city health officials report.

The news is great, but there is a hitch. Not all children are sharing equally in reduced decay.

As is true across the United States, San Francisco’s children of color continue to bear a disproportionate burden of disease.

“All children should be declining,” Margaret Fisher, a dental hygienist from the city health department told reporter Laura Klivans, who highlighted the problem in a State of Health story for KQED News.

“There should not be 25-20 percent of kids of a particular ethnicity having decay while whereas 5 percent of another group have decay,” added Fisher, comparing decay rates among black, Hispanic and Asian children in the city with those of their white peers. In San Francisco, data show that Asians have the highest rate of tooth decay, Klivans noted.

And since the neighborhood with the worst problem is Chinatown, an initiative organized by city and school officials and local dentists is redoubling its focus on children there. Program leaders hope to detect and prevent more disease in the community, reported Klivans, whose story included a lively account of the work unfolding at one local school:

“At Spring Valley Science Elementary School near Chinatown, it was screening day, and students waited for their turn to say “Aaah!” The line snaked down the hallway. Students joked and fidgeted outside the multipurpose classroom where dentist Richard Choi perched on a tiny classroom chair, peering into mouth after mouth with a flashlight and tongue depressor. Sherry, a second-grader with straight black hair, stepped forward.

“Open wide,” Dr. Choi says, “let me take a look up on top.” He counted out loud how many fillings, cavities, and missing teeth Sherry had. A public health official sat across the table from Dr. Choi, logging the results.”

Meanwhile, city researchers are exploring some of the factors that might explain why disease rates are so high in Chinatown. While residents understand the importance of brushing and flossing, avoiding sweets and getting regular professional care, some wait until they notice a problem to call a dentist, according to health worker Christina Nip, who conducted a focus group in the community. Also, some residents say they have difficulties finding dentists who accept their insurance or speak their language.

Other researchers are looking at the problem in populations across the country also cite a chronic shortage of minority dentists as a contributor to higher disease rates in minority communities. Another factor may be the reported wariness of some Chinatown residents to drink city tap water, Nip said, since city water contains fluoride that can help fight decay.

The information gained in this research about community attitudes will be used to develop messages and strategies targeted to reducing decay in Chinatown, KQED’s Klivans told listeners.

Untreated, tooth decay can lead to tooth loss and pain that makes eating, sleeping and studying difficult. Oral infections can have serious, even life-threatening complications. At Spring Valley school, principal Marlene Callejas said she was pleased to see her students getting more dental attention.

She recalled one student, newly arrived from Yemen, who was suffering from an infected cavity, Klivans reported:

“He wanted to spend time out of the class,” Callejas said. “He was crying, he couldn’t focus on paper that was in front of him, he was just in a lot of pain.”

After the student went to the dentist, Callejas said, things turned around. “He could concentrate, and he started learning English faster.”