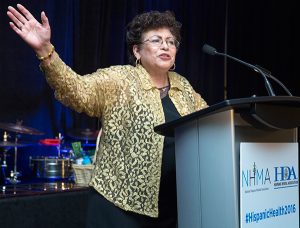 Hispanic medical and dental leaders at a recent joint meeting in Washington, D.C., highlighted the urgency of getting more culturally competent health care services to their communities.

A chronic shortage of Spanish-speaking health care providers has contributed to a lack of access to care and widespread health disparities among Hispanics, they stressed.

Hispanics suffer more than their share of oral health-related diseases ranging from tooth decay to diabetes. Left unaddressed, this situation promises to become a larger burden, not only for the affected individuals but also for the nation’s health care system as a whole, the leaders warned. America’s Hispanic population is projected to increase from roughly 17 percent now to nearly 29 percent by 2060, according to the U.S. Census Bureau.

The challenge of meeting the health needs of this growing population are formidable. Besides a lack of providers working in minority communities, geographic isolation and economic hardships often increase the barrier to getting necessary oral health care to minorities, according to a new report by the Pew Charitable Trusts.

“Poverty, which disproportionately affects communities of color, can create additional hurdles to children in accessing dental care,” notes the paper, “Dental Health is Worse in Communities of Color.”

And as America’s minorities age, some groups are more likely than whites to lose all their teeth, a condition known as edentulism.

While 17 percent of white seniors have lost all their teeth, a full 29 percent of blacks aged 65 are edentulous and 24 percent of Asian seniors are.

In this regard, there is a little good news for Hispanics, who manage to hold onto their natural teeth longer than whites. Only 15 percent of Hispanic elders are edentulous, federal data show.

“Although more research is needed to understand and address the factors that contribute to dental health disparities, significant evidence shows that communities of color face real problems and indicates the nation’s dental care delivery system is failing to adequately support the oral health of all Americans,” conclude the authors of the Pew study.

The Pew report draws heavily upon data from the National Health and Nutrition Examination Survey (NHANES). Because of its size and scope, the federal survey, really an ongoing series of surveys, is a leading source of information on oral health status nationwide.

NHANES combines face-to-face interviews and physical examinations of a nationally representative sample of about 5,000 people each year. The work is overseen by the National Center for Health Statistics, part of the Centers for Disease Control and Prevention (CDC).

The data from NHANES and other big federal research efforts take time to compile and crunch, however.

I asked Jennifer Stapleton, Pew’s communications manager, why the data on children receiving preventive services cited in this new report came from 2009, while the rest of the data about children and adults came from 2011-2012. Here is what she said:

“Basically, the CDC rolls out their data in “waves” annually. And once they get four years of data together, they can analyze in a robust way for each measure. So there has been an update from the CDC in an aggregate way re: children received preventative services. But, the data set isn’t robust enough to be able to break down by subcategory like race yet. Make sense?”

So new NHANES findings are always on the way. Stay tuned.

Meanwhile, if you are looking for a local angle for a story on racial disparities in oral health – or other kinds of health, for that matter – the U.S. Department of Health and Human Services Office of Minority Health has created this directory of minority health contacts for states and territories across the country. Just click on your state. A useful source on minority health issues in your community might be an email or phone call away.

And under an initiative led by the National Institute of Dental and Craniofacial Research, a network of universities has been designated as part of the Centers for Research to Reduce Disparities in Oral Health.

At each center, investigators from diverse backgrounds are working in their communities to research issues surrounding dental caries and oral cancer. If you are in Florida, Massachusetts, Washington state, California or Colorado, there could be a story in their efforts to shed light on oral health disparities.

Then there is this: the local chapters of national organizations representing minority dental providers also can be helpful to reporters seeking local resources and story ideas on oral health disparities. The Hispanic Dental Association has over forty affiliate chapters nationwide. The National Dental Association which has represented dentists of color for more than a century, is comprised of forty-eight state and local chapters throughout the U.S. and Caribbean.

Maybe it would be a good idea to contact your local chapter.