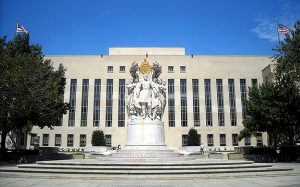 On Thursday, Anthem said it would appeal the Feb. 8 ruling promptly and request an expedited hearing. Cigna said it would review the decision and evaluate its options. Anthem has a financial incentive to appeal given that under the terms of the merger proposal, Anthem agreed to pay Cigna $1.85 billion if the deal fell apart. This Bloomberg story by Brooke Sutherland lays out Anthem’s potential liabilities.

In her ruling, Jackson said that the proposed merger of the insurance giants was likely to raise the cost of health insurance and have anticompetitive effects on the overall marketplace. Jackson sided with the U.S. Department of Justice (DOJ), which during the Obama administration said the plan to bring the two companies together would eliminate what Berman called the companies’ vigorous competition against each other for national employer accounts by cutting the number of national insurers from five to four.

Jackson’s decision comes two weeks after U.S. District Judge John D. Bates ruled for the DOJ to block the merger of Aetna and Humana. While blocking Anthem-Cigna was a win for large employers (those with 5,000 or more workers), the Aetna-Human ruling was considered more of a victory for Medicare Advantage members.

As Brent Kendall and Anna Wilde Mathews explained in a Wall Street Journal story Wednesday night, the courts delivered a similar criticism of both planned mergers. “Judges found that merging top industry rivals posed a risk of higher prices and less service, with the benefits of those deals failing to outweigh the potential harm,” they said.

An appeal of Jackson’s decision initially was considered unlikely because of discord that had developed between the two companies since the deal was announced two years ago. Disagreements between the two got so bad that Anthem defended the merger singlehandedly during the trial. “Cigna lawyers said very little during the proceedings, and when they did, it usually didn’t help Anthem’s position,” Kendall and Mathews wrote.

In her 12-page opinion, Jackson noted the rancor. “The documentary record and the testimony reflect that the pre-merger integration planning that is necessary to capture any hoped-for synergies is stalled and incomplete,” her ruling said. “Much of the work has not proceeded past the initial stage of identifying goals and targets to specifying the steps to be taken jointly to implement them.”

A longer explanation of Jackson’s reasons for ruling against the deal was filed under seal, according to reporting for Bloomberg by Zachary Tracy, David McLaughlin and Andrew M. Harris.

Paul Demko at Politico reported that Anthem argued the merged companies would save $3 billion, most of which would be passed to customers through lower rates and that vigorous competition would continue due in part to the development of private insurance exchanges. “The arguments were ultimately unsuccessful,” he wrote.

Politico’s Dan Diamond wrote about the chilling effect the two consecutive negative rulings may have on consolidation efforts in the industry. However, Carolyn Johnson at The Washington Post cited an analyst who contends merger deals may still proceed if companies believe the Trump administration is likely to be less strict.