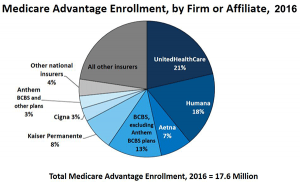 U.S. District Judge John D. Bates on Monday sided with the Department of Justice to block the merger of Aetna and Humana. The ruling is being called a victory for members of Medicare Advantage (MA) plans, since Aetna and Humana — two of the nation’s largest health insurers would, as a combined company, have owned the biggest share of the Medicare Advantage market, The Wall Street Journal reported.

For journalists covering health insurance in their cities and states, there’s a story on how the merger would have affected competition in states where the two companies compete. For the Journal, Brent Kendall and Anna Wilde Mathews reported that the government’s antitrust case focused more on the impact of the deal on local markets than on national market share.

“Aetna and Humana had argued they could alleviate the concerns by divesting — or selling off — assets representing about 290,000 enrollees in 21 states to Molina Healthcare Inc., a managed care company focused primarily on Medicaid,” they wrote.

In a 158-page decision, Bates said why he didn’t buy this argument, writing that the merger would reduce competition among MA plans in 364 counties in 21 states. He noted that when making its case against the merger, the DOJ argued that the effect of the merger “may be to substantially lessen competition” in the public exchange markets in 17 counties in Florida, Georgia and Missouri. This is where the case gets interesting, because it addresses charges the DOJ laid out when it challenged the merger in July.

In its complaint, the DOJ joined with Delaware, the District of Columbia, Florida, Georgia, Illinois, Iowa, Ohio, Pennsylvania, and Virginia to argue that the proposed merger would violate the Clayton Act. A merger of Aetna and Humana would reduce competition among Medicare Advantage plans in 364 counties in 21 states and as well as reduce competition for individual insurance policies sold in the Affordable Care Act’s marketplace exchanges in 17 counties in Florida, Georgia, and Missouri. The merger would hurt 1.6 million seniors in MA plans and on 700,000 individuals who bought coverage on the ACA’s public exchanges, the DOJ argued.

“The wrinkle here is that shortly after the complaint was filed, Aetna announced that it would no longer offer on-exchange plans for 2017 in any of those 17 counties,” Bates wrote.

We’ve written on the AHCJ site about how the merger would affect competition, as well as given some of the angles to consider when covering mergers of health insurers. Now here’s a new angle to consider: Writing for the Los Angeles Times, Michael Hiltzik said that Bates challenged Aetna’s assertion that it was losing money on the Marketplace exchanges and so was leaving the exchanges in 11 of the 15 states where it offered insurance to individuals.

“Now a federal judge has ruled that that was a rank falsehood,” Hiltzik wrote, noting Bates’ contention that Aetna had left some states and counties that were profitable to strengthen its defense against the DOJ’s arguments.

The Aetna and Humana merger could have created the nation’s largest Medicare Advantage insurer. Using data from Credit Suisse and the federal Centers for Medicare & Medicaid Services, the WSJ’s Kendall and Mathews reported UnitedHealthcare has the largest MA enrollment, with 23.7 percent of the market and Humana second with 16.9 percent, Kaiser third with 7.3 percent and Aetna fourth at 7.2 percent. Combined, Aetna and Humana would have had 24.1 percent of the market, barely edging UnitedHealthcare.

Looking ahead, it will be interesting to see whether the antitrust division of the DOJ under President Donald Trump will be any more or less resistant to mergers than the Obama administration. Aetna and Humana may still appeal Bates’ decision. Also pending is a case the DOJ filed to stop the proposed merger of Anthem and Cigna.