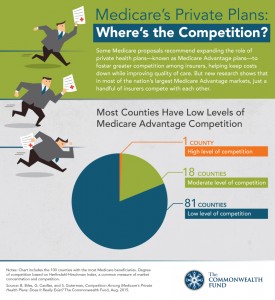 Anyone examining health insurance competition should look closely at a new report from the Commonwealth Fund, which indicates competition among Medicare Advantage (MA) plans is so rare that only one county studied is considered to not have a highly concentrated MA market.

After reviewing enrollment data in all U.S. counties with at least 10 residents enrolled in Medicare Advantage plans, the report, “Competition Among Medicare’s Private Health Plans: Does It Really Exist?,” said that in the 100 counties with the most MA members, market power is concentrated among three big insurers in almost two-thirds of those counties.

In addition, the report said, “using a standard measure of market competition, our analysis finds that 97 percent of markets in U.S. counties are highly concentrated and therefore lacking in significant MA plan competition. Competition is considerably lower in rural counties than in urban ones.’

Only Riverside County in Southern California qualified as competitive, according to the report.

The report is a useful tool for analyzing MA market concentration in all U.S. counties and explains the Herfindahl-Hirschman Index (HHI), a standard measure of market concentration that the U.S. Department of Justice and the Federal Trade Commission use when evaluating competition. Those regulators will use the HHI when analyzing Anthem’s plan to buy Cigna and Aetna’s proposal to merge with Humana.

Among many important points made in the report, here are three to consider:

First, the data was from 2012. As Philip Moeller points out in a column for PBS Newshour, if little competition existed in 2012, imagine what would happen if the Anthem-Cigna and Aetna-Humana deals go through as proposed.

“Now, there is not a whole lot of room above 97 percent for further concentration in local markets. But I bet these mergers would get us most if not all of the way there,” Moeller wrote.

In the coming months, it’s likely that many of us will be writing about the HHI. Noting that the measure is a “statistical method for evaluating whether a market for goods of services is highly concentrated, moderately concentrated or non-concentrated,” Moeller said that after applying HHI, regulators may ask one or more of the companies in the Aetna-Humana and Anthem-Cigna proposals to jettison MA plans in some local markets.

A second point to consider is that the Kaiser Family Foundation has reported on MA plan enrollment by insurer and state and uses enrollment data from this year. KFF explained how MA plans work in a report published in June, saying 16.8 million (about one third of all Medicare beneficiaries) are enrolled in MA plans. KFF showed in another report, published in July, that UnitedHealthcare, the nation’s largest insurer, has 20 percent of the MA market nationwide. Humana has 19 percent, Aetna 7 percent and Anthem and Cigna each have 3 percent.

The third point to consider is how to cover this national story in a city, county or state. In North Carolina, Jason deBruyn of the Triangle Business Journal compared MA market concentration in Wake County to that of statewide MA enrollment, noting that MA enrollment in North Carolina runs counter to a national trend.