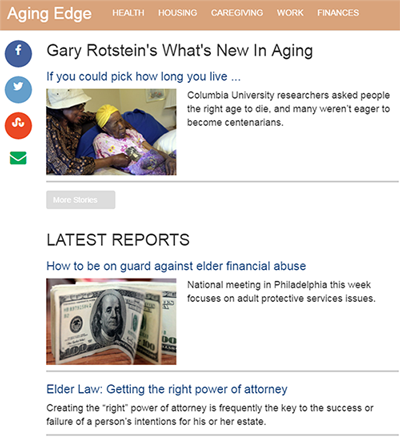 Most reporters are multitasking experts. Not only are they reporting and writing the main story for a media outlet’s print edition and website, but they’re usually also compiling multimedia add-ons such as video, audio and photos. Then there’s the Tweeting, Facebooking, Snapchatting, Instagramming and other social media promotion they are asked to do to drive website traffic — all while getting a jump on their next story (or two).

So why would an experienced journalist approach his editor to take on even more responsibility? Gary Rotstein, a self-admitted anti-digital-anything reporter at the Pittsburgh Post-Gazette, realized that the online environment could actually be a place where stories about his beat — aging — could shine.

His idea was to make the newspaper’s Aging Edge website a reader’s go-to source for anything aging-related, including his stories and others from the Post-Gazette’s staff, aggregated coverage of aging issues from wire services and affiliated media outlets and a place to find resources on a hyper-local level for older adults, caregivers, and others. Sounds a lot like a local iteration of this AHCJ core topic site.

The web section ‘s goal is to serve a reader and community-friendly role for all the information that never made it into the print edition. Rotstein’s editors loved the idea. But older readers … not so much. How could Rotstein encourage the community’s seniors, who are not always Internet-savvy, to use the micro-site as an extension of the paper’s print edition?

As he explains in this new How I Did It article, that’s when the real work began.