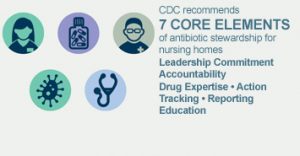 The latest news about the arrival in the U.S. of a deeply concerning “superbug” justifiably injected alarm into the headlines recently.

It was not actually a new bacteria that arrived but the “dreaded gene mcr-1,” a mutation which “confers protection against colistin, the last remaining antibiotic that works against a broad family of bacteria that have already acquired resistance to all the other antibiotics used against them,” as AHCJ board member Maryn McKenna described in her piece at her Germination blog at National Geographic.

Once memory of those headlines fade, however, so might memory of the threat, which might otherwise motivate readers to put pressure on decision makers to do more to address the problem. Instead, journalists could take an opportunity to simultaneously localize the story and get a lot more mileage out of it, keeping it in the forefront of readers’ minds.

One way to do that is to consider the implications of another recent study, published in Clinical Infectious Diseases, which found that just four in 10 hospitals have an antibiotic stewardship program that meets all seven core elements in the CDC’s Core Elements for Hospital Antibiotic Stewardship Programs. (Medscape story about the paywalled study is here.)

That means well over half of the 4,184 U.S. hospitals assessed don’t have such a program.

“Superbugs emerge because of high levels of antibiotic utilization although the precise mechanism by which they occur has not been completely worked out,” David Schwartz, M.D., chairman of the division of infectious disease at Cook County Health and Hospitals System, said in an interview with AHCJ Health Insurance Core Topic Leader Joseph Burns. Schwartz also authored a (paywalled) commentary on the Clinical Infectious Disease study.

“There have been many previous surveys, but this is the most comprehensive because it was as part of the national health care safety network survey of hospitals on antibiotic resistance and infection control issues,” Schwartz said. “So questions on ASPs were inserted into the survey that all hospitals have to respond to as a condition for participation in Medicare.”

Antibiotic stewardship programs are an important part of reducing unnecessary use of antibiotics, which can range anywhere from 20 percent to 50 percent of all antibiotics prescribed in the hospital setting, according to the CDC. “A growing body of evidence demonstrates that hospital based programs dedicated to improving antibiotic use, commonly referred to as ‘Antibiotic Stewardship Programs (ASPs),’ can both optimize the treatment of infections and reduce adverse events associated with antibiotic use,” the CDC reports, citing these two studies.

That all sounds pretty great, the kinds of things most people would probably want to see in their local hospitals — and that’s where the chance to localize the story comes in. Geographic variation by state of these programs ranged from 7 percent to 58 percent, leaving much to be explored locally. Approaching local hospitals to find out what they do could launch a lengthy investigation that stretches indefinitely into future reporting opportunities.

One angle to cover is the challenge of clearly defining what “antibiotic stewardship” is, Schwartz said.

“If you ask people what antibiotic stewardship is and what is the best way to do it you would get a number of different answers, and so it’s a difficult thing to pin down,” Schwartz said. The evidence base for the most effective methods is also shakier, certainly shakier than what supported the need for infection control regulations in the 1970s, he said. He suggests that journalists ask hospitals, “Do you do antibiotic stewardship? What are you doing to ensure that antibiotic use is appropriate for your patients?”

“Other things journalists should be aware of include antibiotic use in animal feeds, which by tonnage greatly exceeds what people consume,” Schwartz said.

Another future resource on ASPs is The Leapfrog Group, which has begun adding to its annual hospital survey whether hospitals comply with all elements of the CDC’s checklist on antibiotic stewardship. “We believe this is an urgent issue and all hospitals should put a priority on antibiotic stewardship,” Leapfrog Group President and CEO Leah Binder said in an email. “Once the Survey cycle is complete this year, we will report on the percent of hospitals meeting our standard.”

Some additional resources to jumpstart your reporting:

2 thoughts on “Localize the story of the latest superbug’s U.S. arrival – for a long time to come”