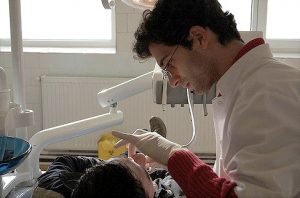 While states are required by federal law to offer a full range of dental services to children under Medicaid, adult benefits are considered an optional part of the program.

It would cost at least $1.4 billion to expand Medicaid dental programs in the 22 states where options for adults are currently limited or nonexistent, according to a new research brief from the American Dental Association’s Health Policy Institute (HPI).

But the price could be partly defrayed by reductions in another area: the $1.6 billion spent each year on emergency department visits for dental conditions. About $520 million of those costs are picked up by Medicaid, according to a separate HPI analysis. Patients who go to emergency rooms seeking attention for dental problems seldom get the services that would address their needs because most hospitals are not set up to provide dental care, a number of studies have found. The study’s authors wrote:

“Diverting this $520 million of inefficient spending toward an extensive adult dental benefit in Medicaid in the 22 states we analyzed would go a long way in covering the estimated $1.4 billion to $1.6 billion price tag we feel is most realistic under our modeling.”

The study notes that the analysis did not include other potential cost savings that might result from expanding Medicaid dental benefits in the nearly two dozen states that lack coverage for routine care.

“These could include lower medical care costs or enhanced employability prospects although it is important to note that these savings may not necessarily accrue to the Medicaid program,” the authors wrote.

The reimbursement rates included in HPI’s projections have been set at 60 percent of private dental benefit charges – the highest level that any state is currently reimbursing providers for adult Medicaid services, the authors said.

In at least other 17 states, adult Medicaid beneficiaries can only obtain treatment for dental emergencies under Medicaid and a handful of state programs do not even cover emergency care. Because adult dental coverage is not mandatory, it is often among the first budget items to land on state chopping blocks in times of fiscal austerity.

To make matters worse, dentists have been historically reluctant to participate in Medicaid, complaining of low reimbursement rates and frustrating paperwork. Many poor communities face shortages of dental providers.

The resulting lack of dental services can take a heavy toll upon poor adults. Access to routine preventive and restorative dental care can help people stay healthy and employable – and may prevent expensive and painful dental emergencies from occurring in the first place.

If you decide to delve further into the costs and benefits of adult dental benefits under Medicaid, you might find the additional resources in this new AHCJ tip sheet helpful.