View all posts by Melinda Hemmelgarn → 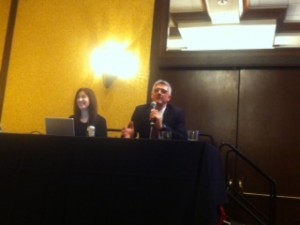 As a registered dietitian who has studied obesity prevention and treatment for more than three decades, I was intrigued by the Health Journalism 2016 session titled: “Science: Breaking Down Obesity.”

Aboraya set the stage, explaining that the Centers for Disease Control and Prevention consider obesity a public health crisis, and in 2015 alone, Americans spent more than $65 billion dollars on weight loss products.

Ievers-Landis, who focuses on pediatric populations, advised taking a sensitive approach with our language.  “Don’t put a label on a child,” she said. ”Be sensitive to the patient you’re writing about.” She stressed the importance of using “person-first” language. In other words, state that the child is overweight or obese, rather than saying “obese child” or “overweight child.”

Children who are overweight often suffer from negative self-esteem.  Ievers-Landis described one child who cries when she changes her clothes because she dislikes her body. Another, just 3½ years old, told her parents that she wanted to die because of her weight.

Ievers-Landis explained that adequate and regular sleep patterns are necessary to keep appetite-regulating hormones functioning. Unfortunately, time spent with electronics often interferes with children’s sleep. And those with autism and ADHD seem more vulnerable to sleep disorders.  As for policy interventions, she recommends later school start times to allow for longer sleep.

Burguera described obesity as a chronic condition requiring ongoing treatment. He has found “shared medical appointments,” where people meet in a group and share their struggles and successes, to be more effective than individual appointments. Some of his patients have told him that their group meeting is the “highlight of their month.”

Without realistic expectations, patients will drop out of weight loss programs. So Burguera strives to help his patients prevent further weight gain, encouraging small changes in lifestyle that can be maintained over the long term. His arsenal of treatments include: nutrition, physical activity, appropriate sleep, stress management, and FDA-approved drugs to control appetite.  (Note: Burguera serves on the board of the pharmaceutical company, Novo Nordisk).

While eating fewer calories is key to weight loss, physical activity is required to keep the weight off, he explained. The good news is even a small amount of weight loss has a significant positive impact on improving general health.

“Are we losing the battle against obesity?” Buguera asked. “We’re not doing well,” he replied. “The bottom line, is what we’ve been doing doesn’t work.”

In considering future policies and strategies for success, Burguera supports financial incentives to encourage lifestyle change, as well as including all stakeholders – from local schools and communities to the federal government.

Topics for further reporting on obesity include: