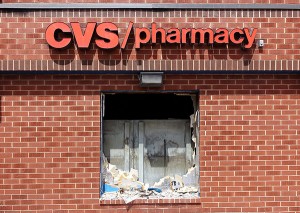 When Baltimore erupted last spring in the wake of the death of a young black man in police custody, the destruction and looting of one neighborhood CVS Pharmacy quickly became a symbol of the chaos.

Now, as the legal proceedings in the case of Freddie Gray continue, a small part of the Maryland city has healed with the reopening of the store on March 6.

“To kind of let what happened before go and move forward and look at the future, and we still have a need here in the community, and we want to be a part of that, and I think it’s pretty awesome to see that both new stores got the healthy food expansion, so it gives us better options for snacking and keeping people healthy,” one district manager for CVS told Baltimore radio station WBAL.

The pharmacy was a lifeline in many ways for residents of the neighborhood in West Baltimore, where Gray lived. It was one of the only places for people to obtain medications, and also vital source for groceries in an otherwise urban “food desert.”

During last year’s riots, 13 pharmacies closed, leaving city health officials scrambling for alternate ways to get their medicines to residents, especially older patients and those with chronic conditions.

Other businesses have re-opened, this time with additional security such as alarms and bars on doors, according to an Associated Press report.

“The reopening of the CVS was very important for that neighborhood because it functioned not only as a drug store but also as a grocery store in that neighborhood,” WBAL’s Robert Lang told WTOP’s Shawn Anderson and Hillary Howard in a March 8 interview.

“A lot of local officials and a lot of residents were grateful that CVS made the decision to reopen, and that happened in less than a year. Compare that to the 1968 riots in Baltimore, when a lot of businesses never reopened and a lot of those buildings remained vacant,” Lang said.

One nearby resident told The (Baltimore) Sun she relied on the store to buy 77-cent cans of tuna fish.

“When you’re down to the last dollar and pay day is a day away, you can always run to CVS and find something,” she told the Sun’s Colin Campbell.