Images streaming from the recent unrest in Baltimore showed parts of a city in flames, buildings in ruins and turmoil in the streets following the death of 25-year-old Freddie Gray April 19 while in police custody. 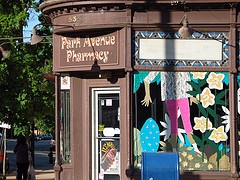 Less visible – perhaps with the exception of a burned and looted CVS – are the scars of limited access to health care in a city with deep pockets of poverty.

A city on the brink

First, a look at the big picture in Baltimore, Maryland’s biggest city with roughly 623,000 residents and glaring disparities in crime rates, income, education, housing – and health.

As The Washington Post’s Michael A. Fletcher, who lived in Baltimore for 30 years, writes, “Freddie Gray’s life and death say much about the difficult problems that roil Baltimore.”

Gray’s neighborhood of Sandtown-Winchester offers a window into the many impoverished areas of the city, where prison, violence and drugs far outpace the city average. Yet, unlike in other similar incidents that have rocked the country in other cities, the issues seem beyond race – the mayor and some of the police who were indicted are black – and steeped in the deep crack of income inequality.

“More than half of the neighborhood’s households earned less than $25,000 a year, according to a 2011 Baltimore Health Department report, and more than one in five adults were out of work — double the citywide average,” Fletcher said. Children there miss many school days, median household income is lower and the percentage of families on welfare higher.

Baltimore’s health challenges include one of the highest concentrations of heroin addicts in the United States, he writes, citing federal data. Domestic violence there is also 50 percent higher than in the rest of the city, murders twice as frequent, Fletcher adds.

Despite being home to two of the nation’s premier health care organizations – Johns Hopkins Health System and the Centers for Medicare and Medicaid Services – blacks in Baltimore are more likely to develop AIDS, more likely to die as infants and more likely to see shorter life spans, according to Dan Diamond, a Forbes contributor who grew up in a more prosperous area of Baltimore.

Diamond puts the gap in stark relief: “Baltimore’s infant mortality is on par with Moldova and Belize.”

At the time of his arrest, Gray and his family were living off settlement payments from a 2008 lead-paint lawsuit against the landlord of a childhood home.

“Such lawsuits are so common in Gray’s neighborhood that the resulting settlement payments — which Gray lived off — are known as ‘lead checks,’” The Washington Post reported.

Photos from a court filing show Gray as a young child in a room with patches of white paint peeling from the wall. Documents showed damaging lead levels in his blood and that of his two sisters. He was several grade levels behind in reading, among other educational and health problems such as attention-deficit hyperactivity disorder, the Post and The (Baltimore) Sun reported.

Both newspapers take a deep dive into the legacy of lead paint in the lives of poor African Americans.

Across Baltimore, 1 percent of children on average have elevated blood lead levels, The Post reported, citing the Justice Policy Institute and Prison Policy Initiative. In Gray’s neighborhood, it was nearly 7 percent.

“It is nonetheless hard to know whether Gray’s problems were exclusively borne of lead poisoning or were the result of other socioeconomic factors as well. From birth, his was a life of intractable poverty that would have been challenging to overcome,” the Post’s Terrance McCoy writes.

In Gray’s case, the landlord settled before it went to trial, and the terms have not been disclosed.

Experts have called lead-based paints a toxic legacy, and the Centers for Disease Control has said there is “no safe blood lead level in children.”

Days after riots damaged a number of pharmacies in Baltimore, a new health crisis emerged – lack of access to medicine.

City officials warned many residents cannot get prescription medications with at least 13 pharmacies closed following riots amid damage and looting. Officials created a hotline to help transfer prescriptions and arrange deliveries, according to the Sun, but access is still a concern.

Local officials had worked for years to draw businesses into poverty-stricken areas like West Baltimore. They had succeeded in getting the CVS that was targeted in the days surrounding Gray’s funeral. Another CVS was heavily damaged while other locations temporarily shut down but have since reopened, according to The Sun. Eight Rite Aid stores also closed.

Ben Kamisar of The Hill writes:

(Mayor Stephanie) Rawlings-Blake defended her handling of the crisis, and lamented the toll that the unrest had taken on her city. She noted that one of the fires gutted a West Baltimore CVS that had been seen as a crucial addition to the community.

“I spoke to someone here who knows how hard we fought to get a CVS to invest into this neighborhood,” she said, noting that the drug stores is the only place some people can pick up prescriptions nearby.

“Everybody know we have a city with great needs, and there are many that are struggling. What happened last night made sure that more people are struggling.”

The store’s arrival and subsequent looting has now emerged as symbolic not only of the city’s riot but of the challenges of bringing health care to impoverished neighborhoods, the Los Angeles Times writes. CVS has said it will rebuild the two burned locations, according to The Washington Post.

Of course, Baltimore is only the latest city to so publicly wrestle with inequality in harsh media spotlight. But it won’t be the last.

Forbes’ Diamond sums it up this way:

“If you think these problems are unique to Baltimore, you’re kidding yourself. More than 35% of Cleveland residents live below the poverty line; more than 39% of people in Detroit do. Even in gilded Washington, D.C., the unemployment rate is 16.5% in one part of the city, and 5.4% in another.”

“Trust me. You can watch fires burn in Ferguson, and cluck your tongue in concern and sadness. But it doesn’t seem like it can happen in your hometown.

Then it happens in your hometown.”

2 thoughts on “Amid turmoil in Baltimore, a story of hidden health care gaps”