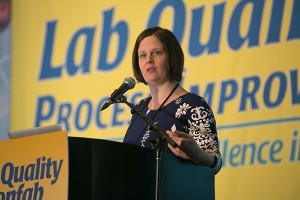 Last fall, I was fortunate to hear journalist Ellen Gabler give a presentation about one of her investigations to a gathering of administrators, executives and pathologists in the clinical laboratory industry.

The session at Lab Quality Confab in New Orleans was unusual because journalists rarely are invited to talk about their work before the industry they cover.

An investigative reporter and assistant editor for the Milwaukee Journal Sentinel, Gabler has exposed serious flaws in clinical labs over the past two years. During her presentation, she urged laboratories to be more transparent and accountable for their results. “Secrets aren’t good,” she said. “They hurt people, and when you’re transparent and open about things, you can get a lot done.”

In just a few days, Gabler will be honored for her work by her own peers. She won first place in the large-publication health policy category of the 2015 Awards for Excellence in Health Care Journalism, which will be presented at AHCJ’s annual meeting in Cleveland, Ohio. She won the award for her series, “Hidden Errors,” which documented how some clinical laboratories did not follow basic procedures to ensure the accuracy of lab test results.

At the New Orleans industry event, Gabler gave an extraordinary presentation. From where I sat, the 300 attendees listened attentively as she described a series she wrote in November, 2013, called “Deadly Delays,” about how hospital labs were not doing newborn screening in a timely manner. She followed up that work last year with the Hidden Errors series.

Following publication of each project, readers from around country responded, including many patients who praised her work. Response from clinical lab professionals was mixed. One said Gabler had done, a “lousy hatchet job,” and another wrote, “It’s shameful of you to build a story around a handful of mistakes.”

But many readers valued her reportage. More than one professional described making improvements in lab processes after reading her articles. Confirming her reporting, a retired lab technologist wrote, “For 30 years I witnessed the farce of inspections. It was appalling.”

The annual Lab Quality Confab is sponsored by The Dark Report, a newsletter that has covered clinical labs for more than 20 years. Publisher Robert Michel wanted the attendees to hear how the public views issues related to the accuracy and quality of lab test results. (Full disclosure: As an independent journalist, I’ve done reporting, writing and editing for the newsletter since 2005.)

During the conference, Michel asked attendees to evaluate the sessions, and the comments on Gabler’s were largely positive.

“I loved this session,” one attendee wrote. “She was refreshing and I think labs need to understand that we are in a fish bowl. I have already reviewed her talk with my staff, and they loved it too.”

“My favorite presentation of the day,” wrote another. “I was impacted by changes in NBS (newborn screening) processes, and ultimately it had a high price tag. This was important to refocus and remember why what we do is so important and critically life-changing … We have to be honest with ourselves about our mistakes.”

Of the few attendees who were critical, one wrote, “I didn’t care for her solicitation of ‘problems.’ Only 0.036 percent of all labs cause most of the problems. It was hard to hear labs painted with the same brush.”

Gabler will receive the award at the Saturday luncheon and will be available to talk with journalists at the conference at the meet and greet following the luncheon.