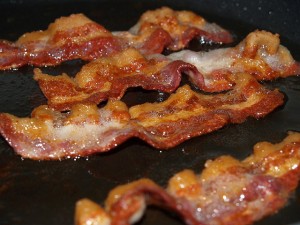 “When you pry the bacon from my cold, dead, cancerous hands …”

Some days it seems the press loves nothing more than a new agent that causes cancer. The more common or beloved that agent is, the better. And so the only way I can think to describe the way the media reported on the news that processed meats cause cancer is “gleefully.” The force of hyperbole was strong on Monday as the bytes and airwaves filled with horror at the prospect that bacon … might not actually be good for us.

Of course, the research linking processed red meats and nitrates in them has been building up for years. I would hope there were not too many souls out there who still harbored the belief that bacon was healthy. (As someone who believes that bacon makes just about anything better, I don’t kid myself about the need to moderate my intake, regardless.) I’d imagine most carnivores would rate bacon with the ambrosia of Mount Olympus, but it’s hardly an elixir for life.

Still, the excesses in reporting reached as high as Mount Olympus, especially with myriad comparisons to smoking. But there’s hope: A number of outlets included some variation of this sentence, usually high up: “However, the reclassification does not mean that eating red meat is as bad for you as smoking.” In fact, quite a few mainstream outlets online offered remarkably solid reporting – with context – on the WHO’s International Agency of Research into Cancer report finding that processed red meats “definitely” cause cancer.

The best explainer wasn’t a mainstream media outlet, but it offers a fantastic model of the balance health reporters might strive to attain in their pieces. The Cancer Research UK piece points out this “news” isn’t new: “But a link between certain types of meat and some forms of cancer – notably bowel cancer – isn’t ‘new’ news – the evidence has been building for decades, and is supported by a lot of careful research.”

The post then proceeds to discuss “what IARC’s classification actually means, how red and processed meat affect cancer risk, and the likely size of this effect.” With a quote containing a lovely banana skin analogy (seriously – go read it), the post also emphasizes, “it’s important to remember that these groups show how confident IARC is that red and processed meat cause cancer, not how much cancer they cause.”

At The Atlantic, Ed Yong expanded on this idea considerably, pointing out early that the IARC is “are terrible at communicating [its] findings.” One of Yong’s key take-homes is that “these classifications are not meant to convey how dangerous something is, just how certain we are that something is dangerous.” But the language IARC uses “completely obfuscates that distinction,” leading Yong to recommend that we probably “need a separate classification scheme for scientific organizations that are ‘confusogenic to humans.’”

Another of the best among the mainstream publications was at BuzzFeed, where Tom Chivers went to the effort of providing not just relative risk but also absolute risk, at least based on British population data: “Taken crudely, the IARC’s report suggests that eating 50g of bacon every day would raise your risk from 64 in 100,000 to 72 in 100,000, or from 0.064% to 0.072%. Over a lifetime, your risk is about 5%, according to the NHS; eating 50g of processed meat a day will raise that to about 6%.”

At Vox, Julia Belluz does a characteristically good job organizing what readers need to know with helpful subtitles and a summary up top of the major points. At Fortune, Tamar Haspel’s piece nicely points out that “scientists do not speak with one voice on this issue” and brought up what few other outlets did – that “the classification could fuel lawsuits.”

And at Gizmodo, George Dvorsky went into detail about the difference between “probable” and “definite” causes of cancer, how to understand the risk of bacon and sausage eating, and the thorny still-unanswered question of just how much is too much. (Also from Gawker Media, Beth Skwarecki’s older LifeHacker piece contains a helpful video on what “probably causes cancer” really means since that was the message for red meat generally.)

The BBC story was also pretty well balanced, though it made an interesting choice for comparison instead of smoking: “It has now placed processed meat in the same category as plutonium, but also alcohol as they definitely do cause cancer.” The Guardian’s story by Suzi Gage likewise tamed the hype by clarifying that smoking causes many more cancers than processed meats and that comparing the strength of the evidence isn’t the same as comparing the risk caused by the exposure of each carcinogen.

At NPR’s food blog The Salt, Allison Aubrey also put the brakes on the alarm raising and included a comparison that offered a bit more perspective than just smoking and asbestos: “The conclusion puts processed meats in the same category of cancer risk as tobacco smoking and asbestos. This does not mean that they are equally dangerous, says the International Agency for Research on Cancer — the agency within the WHO that sets the classifications. And it’s important to note that even things such as aloe vera are on the list of possible carcinogens.” However, I would have preferred to see the kicker quote come from a nutrition researcher rather than an industry group.

So yes, the exaggeration of the story was out there, but it’s remarkable and encouraging that so many outlets inserted the perspective, balance and context necessary for readers to know what to do about their love for bacon.