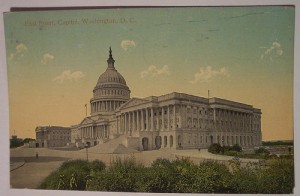 A lot has been said lately about the geography of health, with maps citing longevity by ZIP code, and other health risks such as smoking or obesity broken down by states, counties and other typical boundaries. But rarely do you see it cancer mapped by congressional district.

It’s a project the American Cancer Society recently took on. The research and advocacy group recently released a report looking at cancer rates across the United States by congressional boundaries, found higher rates in districts in the South and Appalachia, while lower rates were in Mountain states. Why further break it down by 435 lawmakers’ districts?

“While cancer mortality data are readily available for states and counties, they are not available specifically for congressional districts. Knowing where cancer burden hits hardest is critical in advocating for and achieving effective cancer prevention and control programs,” the group said in a news release announcing this new report, “Cancer Death Rates in U.S. Congressional Districts.”

Researchers for the group, which said it fully funded the review, analyzed mortality data from the Centers for Disease Control and Prevention’s National Center for Health Statistics and the Census Bureau population estimates, looking at the years from 2002 to 2011 to pinpoint cancer rates in each member of the U.S. House of Representative’s home district. They looked at rates of lung, colorectal, breast and prostate cancers as well as the overall cancer rate.

Lots of reports breakdown cancer rates, so what does this report add to the conversation?

To be sure, the American Cancer Society and its Cancer Action Network spend a lot of time and money lobbying Congress for funding and pushing certain research and other priorities. It benefits them to know how cancer impacts a certain legislator’s district, and who is most affected.

But it could benefit journalists, too. Medicine and money often leads to stories that need to be told.

Look up the congressional districts in your area and find out what the cancer picture looks like when it overlays politics. What are those representatives doing about it? Have they offered any policy solutions, pushed for funding, introduced any legislation? Is the money going to the right places?

According to ACS’s researchers, cancer deaths varied widely in states such as Texas, Georgia and Florida. Reporters in those states could also take a deeper look at what’s driving the disparity and what politicians and researchers are doing about it. Disparities were also pronounced among women and racial minorities, they said. And in areas with lower cancer rates, could reporters look at what legislators have done to help get there? Have any funding or actions helped?

It is clear what ACS wants. Rebecca Siegel, who oversees surveillance information for the group, called for cancer prevention and treatment program funding and more targeted policies. But health reporters who poke around might get something out of the data, too.

A couple of earlier studies mapped cancer rates based on congressional district. It might be interesting to compare data from those studies to this more recent study.