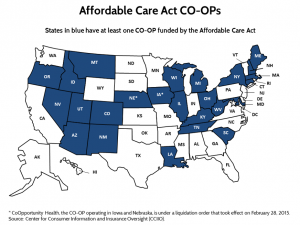 When drafting the Affordable Care Act in 2010, Congress wanted to foster competition among health insurers. So it offered loans to nonprofit organizations that wanted to start health insurance consumer oriented and operated plans (called co-ops) in the states.

In theory, the co-ops are a great idea to increase competition and consumer choice. Congress included $2.4 billion in the ACA to establish these member-operated health insurance plans. The co-ops are particularly important today because five of the largest health insurers could soon be reduced to three if Anthem acquires Cigna and Aetna merges with Humana.

In practice, however, co-ops have struggled. Only a co-op in Maine, Community Health Options, has turned a profit. What’s the secret to CHO’s success? There are several.

CHO has been conservative with the $132 million in federal low-interest loans it got from the federal Centers for Medicare & Medicaid Services in 2012 and 2013. CMS said the funds should be used for startup costs and maintaining solvency. So far, solvency hasn’t been an issue for the Maine co-op.

“We haven’t ‘used’ any of the solvency funds, but only drawn these funds down as necessary to put up the reserves required by insurance regulation,” Chief Executive Kevin Lewis said. “To date we’ve drawn down almost $45 million, leaving an additional $75 million available for additional growth.”

Another apparent reason for its success was that CHO provided a new choice in the Health Insurance Marketplace, which the federal government runs in Maine. When the marketplace opened in 2014, the only other health insurer offering plans was Anthem Blue Cross Blue Shield, Lewis said.

In some states, health plans offered aggressively low rates to win market share but in Maine, Anthem and Health Options didn’t, he said. They instead offered plans at similar rates.

In addition to its members in Maine, CHO expanded into New Hampshire this year and now has 8,000 members in the Granite States, Lewis said.

In both states, CHO has an extensive list of in-network providers. “We contract with every hospital in Maine and New Hampshire and every essential community provider, meaning all of the critical access hospitals, all federally qualified health centers, family planning clinics and tribal health centers,” he said.

Another reason CHO was attractive to consumers was that it offered a value-based insurance design for those with chronic conditions. “In our chronic illness support program, we use VBID to reduce financial barriers to necessary access to care,” Lewis explained. “For members with diabetes, for example, we took away the cost sharing for medical office visits, lab tests, drugs and medical equipment. We pay for all that because we want to keep people healthy and active.”

CHO’s success contrasts sharply with the struggles of the 23 other co-ops, according to a report last month from HHS’s Office of Inspector General. The co-op in Vermont, for example, never got its state license to operate and was disbanded before it could offer coverage. As of Dec. 31, 21 of the 23 co-ops had incurred net losses and none met their own goals for enrollment and profitability, the OIG said. The other co-ops suffered losses ranging from $3.5 million in Montana to $50.4 million in Kentucky.

For most co-ops, member enrollment and profitability were lower than projected and both factors could limit a co-op’s ability to repay its loans, Pat Kelly, an OIG senior auditor, said during a podcast. As of Dec. 31, five co-ops had less than 10 percent of projected enrollment.

Except for CHO, none of the others was profitable and more than half had losses of at least $15 million, Kelly said. For most co-ops, the cost of medical claims exceeded premium revenue, leaving insufficient funds for administrative and operating expenses.

This year two co-ops closed and the first, CoOportunity Health, which served Iowa and Nebraska, could be the first of many to fail, Tony Leys reported for the Des Moines Register. The co-op, which was liquidated in March, received $146 million in federal grants and loans and covered 120,000 people in the two states. Year-end data was unavailable for the OIG report because the Iowa Insurance Commissioner had already taken control of it in December due to financial concerns.

Last month, the Louisiana Health Cooperative Inc. said it will close at year end after losing $5.7 million, Modern Healthcare’s Bob Herman reported. Its 16,000 members will need to find insurance from one of the five other insurers that sell policies on that state’s marketplace, Herman wrote. As of December 2013, CMS had given the Louisiana co-op start-up funding of $750,000 and a loan of $65.8 million.

2 thoughts on “Among 23 health insurance co-ops, Maine stands out for its success”