Nearly 700 people attended Health Journalism 2015, the annual conference of the Association of Health Care Journalists. The gathering, in California’s Silicon Valley in late April, provided journalists with expert speakers and panels on everything from hospital quality to a press briefing with the secretary of the U.S. Department of Veterans Affairs.

In a kickoff speech that many attendees talked about throughout the conference, Stanford physician and author Abraham Verghese, M.D., offered an eloquent description about the importance of how doctors care for patients.

“His talk on the importance of bedside medicine and physical examination was as much a lesson in narrative journalism as it was a description of how he practices,” wrote Joanne Silberner on Covering Health.

Verghese lamented that doctors often spend too much time looking at their computers and not enough time looking at – and listening to – their patients. “The i-patient is getting wonderful care,” he said, “while the real patient is saying ‘Where is everyone?’”

More than 140 journalists gathered to hear Veterans Affairs Secretary Robert McDonald – and to question him about VA policies, including the agency’s notorious opaqueness with reporters. McDonald announced an 11-member Special Medical Advisory Group to consult with the agency on “matters related to health care delivery, research, education, training of health care staff and planning on shared care issues facing VA and the Department of Defense.” 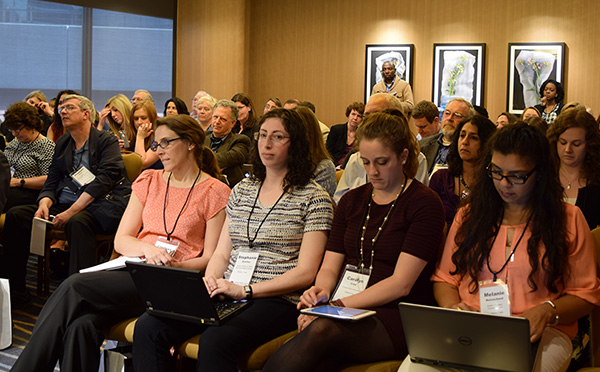 The room was packed for the “New Tech Tools for Journalists” panel. (Photo: Pia Christensen/AHCJ)

At the annual awards luncheon held at the conference, Deane Marchbein, M.D., the U.S. president of Doctors Without Borders/Médecins Sans Frontières, offered her perspective on how the U.S. media covered Ebola. “Instead of focusing on the medical literature and the facts related to Ebola, many of your colleagues fanned the hysteria and the frenzy and the fear,” she said.

The doctor, who recently returned from working in Africa, said that “an opportunity to educate, inform and reassure was, to a great degree, missed.”

During the question-and-answer session with Marchbein, journalists told her that more than one news outlet has had trouble getting access to MSF and its experts, something she said she would address.

“It’s you, the journalists, who inform and alert and help create the conditions for a humanitarian response. But beyond informing the world, you have another very important role to play – that of holding all actors accountable,” she said.

Winners of the 2014 Awards for Excellence in Health Care Journalism were recognized at the luncheon. The contest’s winning entries in 11 categories included critical looks at robotic surgery, the high costs of care, Medicare fraud and reporting from the frontlines of Africa’s Ebola outbreak. 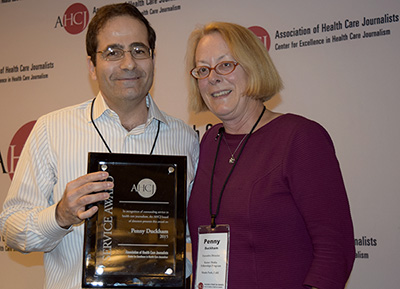 Penny Duckham, who directs media fellowships and internships for the Kaiser Family Foundation, was presented with a special first-time award for her service to health journalism. Duckham, an early supporter of creating AHCJ, has been involved in the training of numerous health journalists since 1993.

A fundraising appeal at the awards luncheon raised nearly $7,000 in cash and pledges, in addition to $4,700 in pledges from AHCJ’s board members and executive director.

Field trips at this year’s conference included some of the area’s top research and health-related centers, including Lucile Packard Children’s Hospital Stanford, the Office of Emergency Management at Stanford Health Care, the SLAC National Accelerator Laboratory, the Center for Immersive and Simulation-based Learning at Stanford and the VA Palo Alto Health Care System.

Health data was unveiled in another briefing on county-by-county alcohol use and revealed an increase in binge drinking, particularly among women.

Several panels during the conference addressed the interests of freelancers looking to make the most of the market, while there were also sessions on understanding and reporting on medical research, new technology in the health care field, climate change, reporting on inequalities in health, the Affordable Care Act and much more. Read more about the conference sessions.

Health Journalism 2016 is scheduled for April 7-10 in Cleveland, hosted by Case Western Reserve University, The Cleveland Clinic, Cleveland University Hospitals and MetroHealth, with support from the Robert Wood Johnson Foundation and The Leona M. and Harry B. Helmsley Trust Charitable Trust.