Stephanie Innes is a senior reporter covering health at the Arizona Daily Star in Tucson. She attended Health Journalism 2016 as one of five health system fellows through the Commonwealth Fund. In 2016 she was named journalist of the year by the Arizona Newspaper Association.

View all posts by Stephanie Innes → 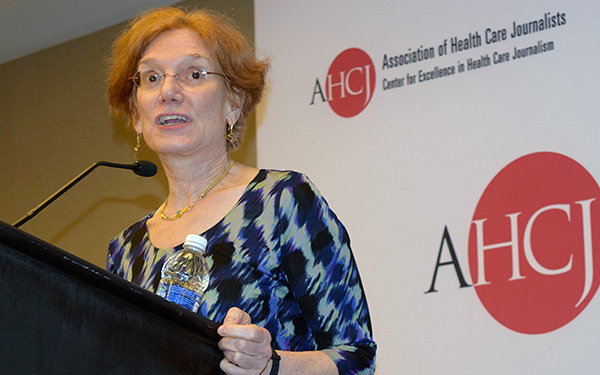 Media coverage of the Ebola epidemic did a disservice to the public and, “a reckoning is due,” a Médecins Sans Frontières/Doctors Without Borders leader told health care journalists gathered in Silicon Valley last month.

“Instead of focusing on the medical literature and the facts related to Ebola, many of your colleagues fanned the hysteria and the frenzy and the fear,” Deane Marchbein, M.D., told journalists gathered for Health Journalism 2015, the Association of Health Care Journalists’ annual conference, in Santa Clara, Calif.

“An opportunity to educate, inform and reassure was, to a great degree, missed.”

Ebola dominated the headlines only when an American became infected, said Marchbein, who is president of the U.S. Board of Directors for MSF/Doctors Without Borders and was the keynote lunchtime speaker.

The response to Ebola is “disappointingly reminiscent” of the early days of the HIV epidemic, she said, when individuals living with HIV were shunned and policies were enacted based on fear rather than scientific knowledge.

There were four cases of Ebola reported in the U.S. and one death. By comparison, the Ebola death rate in West Africa was 60 percent to 80 percent of those infected, she said.

“The so-called epidemic in Dallas distracted from the real raging epidemic in West Africa,” Marchbein said. “Instead of turning attention to the actual viral outbreak, we obsessed about whether you could get Ebola from a bowling ball or from riding on the subway. “

She cited examples in which she thought responses to the epidemic fell short:

According to Marchbein, the Ebola crisis exposed a glaring gap in the lack of access to affordable health care, which she characterized as, “the single most important health story yet to be told. … Innovation without access is a cruel tease.”

During the question and answer session following her talk, journalists told Marchbein that media access to MSF has been lacking, and cited numerous roadblocks, which she promised to address.

She said journalists are essential in improving global health and noted that journalists helped found MSF more than 40 years ago.

“It’s you, the journalists, who inform and alert and help create the conditions for a humanitarian response. But beyond informing the world, you have another very important role to play – that of holding all actors accountable,” she said.

“MSF, which perhaps failed to modify our own approach fast enough, should not be spared from your scrutiny. While we believe that we are pretty good at self-reflection, we are still composed of human beings. All of us are flawed in the usual ways, with excessive pride, imperfect responses under stress and during emergencies, and an unwillingness at times to acknowledge or address our inadequacies.”

Stephanie Innes is a senior reporter covering health at the Arizona Daily Star in Tucson. She attended Health Journalism 2016 as one of five health system fellows through the Commonwealth Fund. In 2016 she was named journalist of the year by the Arizona Newspaper Association.