The executive director of the Health Care Incentives Improvement Institute (HCI3), de Brantes (@Fdebrantes) said, “Call them on their bull sh–. Their arguments against price and quality transparency are bogus.”

Yet when state legislatures consider laws promoting the public reporting of health care prices and quality ratings, provider organizations often lobby against these laws. “What are they protecting?” he asked. “Doesn’t the public have a right to know?”

Providers promote the false ideas that gathering accurate price and quality data is difficult, if not impossible, and that variations in price result from the severity of illness in populations, de Brantes explained. By debunking these myths, journalists would inform policymakers and the public that there are ways to calculate the prices of medical episodes of care accurately, and that price variation can be controlled. “Price varies because of the way physicians practice,” he said.

Organizations such as HCI3, the Catalyst for Payment Reform and Consumers Union, among others, are developing definitions, methods and other ways to calculate prices and to evaluate care quality.

“We’re going to publish these methods and offer free analyses to remove all excuses for doing the right thing,” de Brantes predicted. “The reason we haven’t made enough progress is because too many politicians and bureaucrats lack the guts to get it done.” Also, of course, legislators believe the myths that providers promote, he said.

While all these statements are untrue, they are nonetheless used to block transparency efforts. 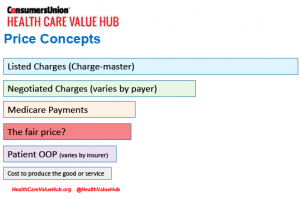 In addition to spreading such misinformation, health care providers often obscure the true cost of care by failing to provide full and accurate prices for services, said Lynn Quincy (@lynnquincy), director of CU’s Health Care Value Hub. Few hospitals or physicians provide prices to consumers, and when they do the numbers often are not meaningful, she added. Hospitals publish listed charges, for example, but these are the highest rates a facility charges, and few consumers would pay these amounts. Listed charges are the full list price, or the chargemaster charge. For more on the chargemaster, see “Bitter Pill: Why Medical Bills Are Killing Us” (Time, March 8, 2013) by Steven Brill.

Most insured patients pay what are called negotiated charges, which vary by payer, Quincy said. Medicare and Medicaid payments are often the lowest rates a hospital will charge. 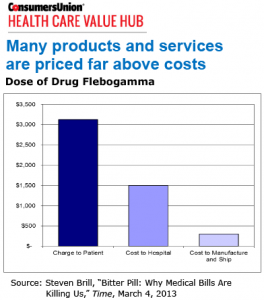 There is also what Quincy called the “fair price” but determining this price is difficult because not all hospitals know the costs that go into each service. Other charges include patient’s out-of-pocket costs and these vary by patient and health plan. Lowest of all is the actual cost of a service, Quincy said.

Both Quincy and Suzanne Delbanco (@SuzanneDelbanco), executive director of the Catalyst for Payment Reform, made the point that price and quality transparency are similar in that both seem simple but are in fact extremely complex topics to cover. Most consumers, for example, are unaware of such quality measures as hospital infection rates and the CAHPS Hospital Survey from the federal Agency for Healthcare Research and Quality, Quincy said.

For stories to pursue, Quincy suggested journalists write about consumer anger over the dysfunction in the health care system. Expose greedy actors and unsafe practices, she said. Reveal how hospitals and physicians charge for care and how those charges are often unrelated to costs. Also, by working with health care quality experts, journalists can develop checklists that patients can use to stay safe in the hospital.

Delbanco explained that even when consumers know what health services cost, they often don’t use that information. A survey CPR conducted in 2013 showed that 98 percent of health plans offered their members price calculators. Most of these tools reflected each member’s actual costs including copayments and deductibles. But only 2 percent of health plan members used these tools, the survey showed.

Journalists should write about why consumers don’t use price transparency tools, she suggested. Also, explore why estimates from some price-transparency vendors are often inaccurate. Do these vendors over-promise and under-deliver, she asked. And, reporters could investigate whether price transparency changes the way physicians practice medicine.