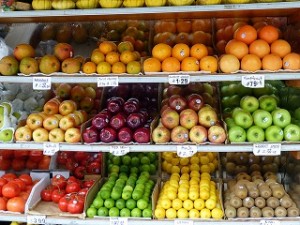 Hoping to encourage healthier eating habits, leaders of the Navajo Nation have imposed a potentially precedent-setting tax on junk food and sodas.

The 27,000-square-mile territory, which extends into Utah, Arizona and New Mexico, as of April 1 added a 2-cent sales tax to an existing 5-cent sales tax on most goods sold there, Eliza Barclay reported for National Public Radio’s food blog, The Salt. Fresh fruits and vegetables sold on the reservation have been tax-free since October as part of the tribe’s healthy eating initiative.

By including snacks, sweets and baked and fried goods of “minimal-to-no nutritional value” in the sales tax, the Navajo Nation’s Healthy Diné Nation Act approved last fall goes even further than Berkeley, Calif., where voters last year made their city the first in the nation to tax sugar-sweetened beverages.

Navajos have deep reasons to worry about their health. Obesity rates in the tribe are almost three times the national average, reported Laurel Morales in a story for NPR. Rates of diabetes also are alarming, noted Alysa Landry in her coverage of the tax for the Indian Country News.

According to Indian Health Service statistics, an estimated 25,000 of the tribe’s 300,000 members have Type 2 diabetes, and an additional 75,000 are pre-diabetic, Landry reported.

“That’s one-third of our entire population,” grassroots community leader Gloria Ann Begay told Landry. “The trend of obesity and diabetes is soaring very quickly, so we need to put some kind of stopgap measure on that.”

Unmentioned so far in news coverage of the tax is the serious epidemic of oral disease among Navajo people.

“The percentage of children with untreated decay appears to have declined in the past decade, although it remains today substantially higher (three to four times) than national averages,” authors of the study wrote. The community faces a lack of dental providers.

It is not hard to imagine that sugary foods and sodas have made matters worse.

As stories about the reservation’s junk food and soda tax have highlighted, members of the tribe face major challenges making healthier food choices. Grocery stores are even scarcer than dental clinics on the sprawling reservation and the more common small convenience stores sell mostly junk food and soda.

“The Department of Agriculture has labeled the entire Navajo Nation a ‘food desert’ because of the lack of healthy foods,” Morales reported. To reverse the trend, she said the tribe plans to fund a variety of initiatives, such as subsistence farming projects, from the $2 million to $3 million it expects to raise from the tax annually.